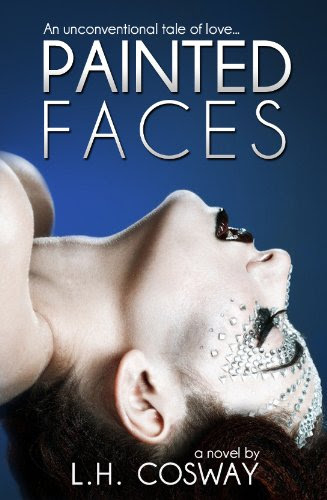 Freda is a young Dubliner who likes to be called Fred. One day she introduces herself to her new neighbor, who tells her he'd like to be called Vivienne. It's only after Nicholas invites her to one of his shows that she realizes he's actually a professional drag queen, not just a guy with a weird sense of humor. Nicholas asks Freda to be his costume assistant, but it's clear he wants more than just a professional relationship or friendship. Will Freda be able to put up with his moody bullshit long enough for these two crazy kids to get together?

I picked up Painted Faces because romances with a heterosexual drag queen as a hero are pretty unusual. You know I'm a sucker for books that are unconventional like that. I'm really glad I took a chance on it, because it was totally fun and entertaining.

What made Painted Faces for me was the heroine and narrator, Freda. She is awesome and hilarious! First of all, she makes cupcakes for a living. How can you NOT love someone who makes cupcakes?? She also has an attraction for anything odd and is always ready with the clever quips. Some of the dialog exchanges in Painted Faces are pretty sharp. She has great friends, drinks too much, visits her parents nearly every weekend, and loves music. She's a character that I felt like I knew and would want to be friends with in real life.

As for Nicholas, he reminded me of something from an animé. As in, cartoonish. You know those beautiful guys in animé shows that are surprisingly kick-ass, yet super-moody and occasionally go into shame spirals because of their DARK PAST? Yeah, he was kind of like that. And sometimes he got slightly rapey, or at the very least sexually harassing. At first it was just awkward and funny (there are so many funny/awkward--fukward?--situations in this book), but as Nicholas and Freda began to know one another more, he only got pushier. I started to get really impatient and annoyed with him about halfway through the book, and equally annoyed with Freda for putting up with his crap. I get that she like-likes him, but no means fuck off, buddy. Once we got to the DARK PAST reveal I really didn't care anymore, and it didn't seem much of a dark past secret anyway. So while I totally get why he would fall in love with Freda, I didn't find Freda's attraction to him that convincing.

There are also a bunch of secondary characters in Painted Faces who are fun and show how much thought LH Cosway put into the two main characters--not just their personality, but their hobbies and what types of people they hang out with. I also LOVED the setting; I seriously need to read more books set in Dublin.

Even though I think Painted Faces is too long and I was a little disgusted with with romance in the third quarter of the book, I still like it for Freda and what a fun and entertaining read it was. The ending was also really sweet and kind of redeemed the whole book for me. I am definitely going to check out more work from this author.