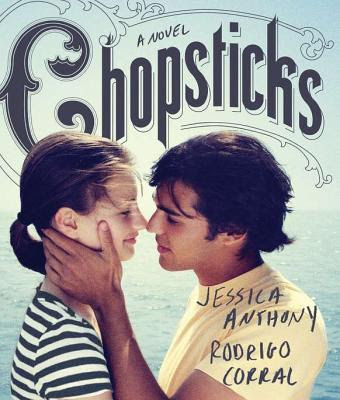 Glory, a piano prodigy, has a nervous breakdown and obsessively plays Chopsticks over and over. Then one day she simply vanishes from the "rest facility" she's staying in. What happened to Glory? Why did she go crazy and where did she disappear to?

An example page from Chopsticks, via the novel's Tumblr.

Chopsticks is a book told almost entirely in pictures. Not so much like a graphic novel, more like a scrapbook. I've been wanting to read it for a long time, ever since I read Vasilly's review of it at 1330v. I have to say, I'm very torn about this book--on the one hand, I love the concept and definitely think creative ways of storytelling like this should be encouraged. But on the other hand, the execution left a lot to be desired.

The photographs and visuals in Chopsticks are gorgeous, certainly, but not consistent with the time period the novel is set in. It starts in the early '90s, but everything in the photographs--from the type of film used to the clothes and hairstyles of the subjects--look like they're circa 1970s. There are also visual themes in the book that are never explained and seem really random. If any of you follow me on Pinterest, you know I love octopi (they're my favorite animal), but why all the octopi in Chopsticks? Glory's obsession with Jo Ann Castle was also really weird and anachronistic. At first I thought it was a metaphor for Glory's life, seeing as how Castle seems like a performing monkey; but by the end I realized this isn't the type of book that trades in metaphors and no, Glory actually just liked Jo Ann Castle and watching The Lawrence Welk Show. You know, like a normal teenager! The Malbec wine theme also seemed really random and weird. I don't know a lot of teenagers who are that into wine, and these teenagers even say they're not! Yet Glory's boyfriend's parents give him wine for a birthday present? MAKES NO SENSE. Who does that?

An example page from Chopsticks, via the novel's Tumblr.

As for the story, I found it really shallow and obvious. The characters had no depth. Glory's dad was over-the-top controlling, the school administrators were cartoonishly bureaucratic, and Glory and her boyfriend only had two speeds: histrionic whinging and total freak out. I'm not saying I didn't understand their frustration, but that's ALL we ever got of their personalities. It needed to be balanced out with some cognitive reasoning (not lovey-dovey make-out sessions) in order to be believable. Or bearable. I knew exactly where the book was going by the end of the second chapter and was disappointed that there were absolutely no surprises or twists in the story. The conclusion to Glory's serious psychiatric problem was laughably simplistic, not to mention kind of unrealistic.

So while I liked the concept of Chopsticks and would definitely encourage Jessica Anthony and Rodrigo Corral to continue experimenting with telling stories in this format, I don't think this particular book was successful. A better option if you're looking for a story told in pictures might be Miss Peregrine's Home for Peculiar Children by Ransom Riggs.