This urban fantasy/romance is a cornucopia of popular supernatural creatures, with vampires, vampire hunters, angels, and even zombies--yes, my friends, zombies! It does a good job of setting up a new series, although I can't say entirely liked it. Or rather, I liked a part of it and hated another part.

Elena is a vampire hunter extraordinaire. She and her colleagues chase down runaway vampires for angels, who Make vampires in return for 100 years of servitude. When vamps try to jump their parole, Elena tracks them, tags 'em, and carts them back to the hoosegow, much like a female version of Dog the Bounty Hunter.

Then the Archangel of New York City, Raphael, requests her services. He wants Elena to lead him to another archangel, Uram, who's gone a wee bit on the wrong side of bat-shit insane. Despite the ginormous amount of money he's paying her, Elena isn't really happy about this because 1. archangels are scary; and 2. she's certain either Raphael or Uram will kill her before the job's over. But you can't say no to the Godfather Archangel, especially when he's all sexy-like.

The beginning of Angels' Blood kind of pissed me off. Admittedly, Hush, Hush used up all of the little patience I have for the jerk-angel-and-the-woman-who-is-inexplicably-attracted-to-him trope; but even more annoying was Elena denying she was attracted to Raphael, even though it was obvious that she was. (Note to rom heroines: just because you're attracted to someone does not mean you have to bang them. I'm just throwing that idea out there.) One of the reasons why I hate that sort of thing in romance novels is that reinforces the idea that when women say no--which Elena did plenty of in the first half of this book--they really mean yes--which she really did. And that is bull.

Around the halfway-point, both stalker Raphael and trigger-happy Elena (seriously, I don't think this woman should be issued firearms) reallllly started to annoy me. However, at that point in the book the relationship shifted to become more equal, and I began to enjoy it a lot more. Of course, Raphael has no personality, and I have no idea why he's even attracted to Elena beyond the point that she's fiesty, but at least he was no longer a total douche. Plus, the hunt for Uram FINALLY got underway (yes, halfway through the book), so the story became much more exciting.

In fact, Angels' Blood improved exponentially in the second half, to the point that I actually truly liked it by the end. I think it does a great job of setting up the next book in the series, which I'm definitely looking forward to reading. So although I had plenty of problems with it, it did end up being a satisfying book.

And now for the twenty-dollar question: 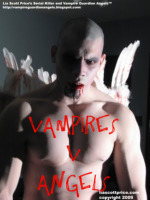 Angels--iz they the new vampires?

I'm going have to go with a draw on this one.

On one hand:
On the other hand: 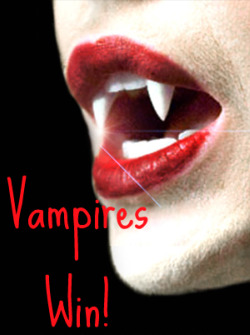