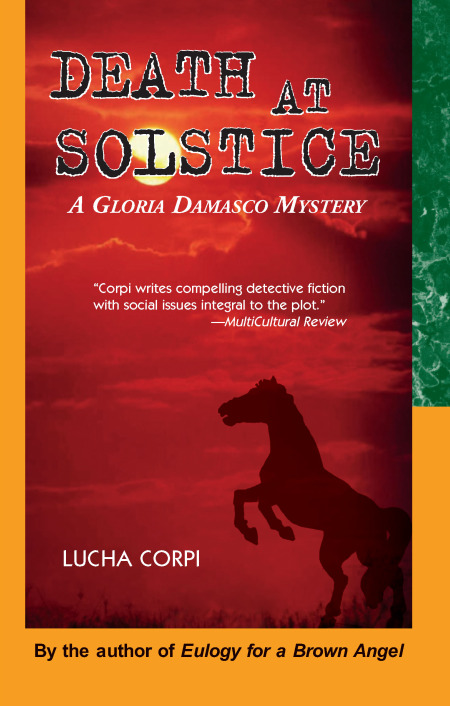 Today, mystery writer Lucha Corpi is visiting to tell us about the heroine of her latest book, Death At Solstice. Here is the summary of the book from Amazon:

Chicana detective Gloria Damasco has a ''dark gift,'' an extrasensory prescience that underscores her investigations and compels her to solve numerous cases. This time, the recurring vision haunting her dreams contains two pairs of dark eyes watching her in the night, a phantom horse and rider, and the voice of a woman pleading for help. But most disquieting of all is Gloria's sensation of being trapped underwater, unable to free herself, unable to breathe.
When Gloria is asked to help the owners of the Oro Blanco winery in California's Shenandoah Valley, she finds herself on the road to the legendary Gold Country. And she can't help but wonder if the ever-more persistent visions might foreshadow this new case that involves the theft of a family heirloom, a pair of antique diamond and emerald earrings rumored to have belonged to Mexico's Empress Carlota.

Soon Gloria learns that there s more to the case than stolen jewelry. Mysterious accidents, threatening anonymous notes, the disappearance of a woman believed to be a saint, and a ghost horse thought to have belonged to notorious bandit Joaquin Murrieta are some of the pieces Gloria struggles to fit together. A woman's gruesome murder and the discovery of a group of young women from Mexico being held against their will in an abandoned house send Gloria on a fateful journey to a Witches' Sabbath to find the final pieces of the puzzle before someone else is killed.

Corpi weaves the rich cultural history of California's Gold Country with a suspenseful mystery in this latest installment in the Gloria Damasco Mystery series.

Lucha is a poet, novelist, and children's book author. Her art has always meant activism. As a woman, a Hispanic, an immigrant and a mother, she has always found herself breaking down barriers in both life and literature. In 1970, she received a National Endowment for the Arts Creative Writing Fellowship for poems later included in Palabras de mediodia / Noon Words (Fuego de Aztlán Publications, 1980; bilingual edition Arte Público Press, 2001). Her first collection of poems appeared in Fireflight: Three Latin American Poets (Oyes, 1976), and a third poetry collection followed: Variaciones sobre una tempestad / Variations on a Storm (Third Woman Press, 1990). In 1990, Corpi was twice honored: she was awarded a Creative Arts Fellowship in fiction by the City of Oakland, and she was named poet laureate at Indian University Northwest. She was a tenured teacher in the Oakland Public Schools Neighborhood Centers Program for over 30 years.

Lucha is kind enough to describe how Gloria Demasco's psychic abilities came about. BUT, before you read any of the post, go to Book-lover Carol to read part one!


In time, I learned from Gloria that she had a dark gift, a psychic power, whatever that meant, because she wouldn’t tell me anything else about her dark powers. Was she a kind of fortuneteller? Palm reader, perhaps? Maybe a sorceress, a witch. Was she a New Age or Old Age psychic? There was so much to research. And I dove into the psychic pool head first.

I began to attend psychic fairs, séances, mid-summer and mid-winter solstice celebrations, Sabbaths, had my fortune read countless times, my aura cleansed at least twice, had regressions to at least four past lives, attempted astral projections but my spirit could never manage to stay air-bound long enough to soar freely. Every time I attempted it I remembered the wild windsock specter and plummeted straight to the ground, opening my eyes just before I hit the ground.

At every séance, Sabbath, solstice celebration and psychic encounter, I asked for a receipt. At home, I put all of the receipts in a Mexican basket together with the rest of my tax receipts and documents. I had to justify my research expenses. And they were legitimate research tax deductions for a writer, or so I thought until the IRS decided to audit my 1990 tax return two years after the facts. By that time, Eulogy had been published. The two tax auditors chuckled when I handed them each a copy of the book as proof that indeed my delving into the mantic arts was a legitimate endeavor for a writer who respected her art and wanted to be factual. Two weeks later, I was summoned back to their office, given back the books they had indeed read and loved but couldn’t keep. Their keeping the copies of my novel could be misconstrued as bribery, and they could lose their jobs. I owed the IRS nothing.

Long before my dive into the IRS audit, I had already found out, as I wrote the novel, that Gloria Damasco was a clairvoyant. In each of the novels, she tries to explain to herself and to the rest of us what her dark gift is all about. In Death at Solstice, her latest adventure, she says:

… Prior to the night before, I had never been able to save anyone whose life, in my visions, was fated to end. It bothered me no end to see what fatal blow destiny had in store for someone yet be unable to prevent it. But that was the nature of this dark gift, this extrasensory prescience in me—la otra.

Most people did not understand what clairvoyance was. My visions weren’t a tidied bunch of related scenes laid out, like a classic story, in a linear narrative. They varied from images to smells and sounds that bombarded my dreams. My subconscious somehow sorted them out and stored them until, if ever, I worked on a related case.

Talking with some of my poet friends over the years, I realized that poets, without being aware of it, also went through a similar process as mine. All the incongruent elements of a poem were already present at various levels of consciousness or the subconscious. In the poet’s case, the outcome was the poem. In mine, the results were not so easily discernible, not even for me.

Although at times I still doubted the legitimacy of my dark gift, I seldom allowed myself not to act on a vision. I pushed myself to do the necessary legwork to solve its cryptic warnings, regardless of its outcome. It was the only way to keep my twin psyches in check, my split spirit in harmony.

Gloria’s reason is forever running interference. She is always trying to prove to herself that she indeed possesses a dark gift. She is compelled by her visions to take a case, but she solves it by following and analyzing clues, using her powers of deduction, as any normal P.I. would, to bring the criminal to justice.

I do my share of legwork too, by doing my research so she has everything she needs to solve the case ready at a moment’s notice.

That is my job.

The publisher is offering one copy of Death At Solstice for a lucky reader. To enter, just comment on this post. Make sure you enter a valid e-mail address with your comment, as that's how I will be notifying the winner. The winner will be chosen via a random number generator, and the contest will close at midnight, December 15th.

ETA: The publisher needs to send the books out by Monday, so I will have to close the contest on December 11th at 6 PM, mountain time. I apologize for the error.

In addition, Lucha Corpi is offering her entire mystery series to one lucky reader who comments on all of her blog posts in this book tour. Here is the list of Lucha's stops: