Interred With Their Bones by Jennifer Lee Carrell 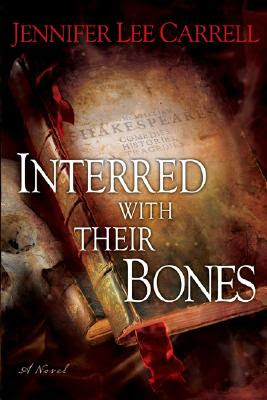 This book could easily be called The Shakespeare Code--it has all the mystery, puzzles, treasure, and travel of The Da Vinci Code, but with more solid research backing it up.

Kate Stanley has her dream job, directing Hamlet at the Globe in London.  A former Ph.D. student studying Shakespeare, Kate burned a lot of bridges when she quit Harvard, and she swore to never look back.  But now her former mentor, Professor Rosalind Howard, appears with a box she claims holds the secret to something big, and she wants Kate to help her uncover it. Although highly doubtful, Kate agrees to keep the box and think about it--but before she can give the professor her answer, the Globe has burned, and one person is dead: predictably, Rosalind Howard.  Kate quickly becomes convinced Roz was murdered, and the same person is now chasing her in pursuit of the box.  With the help of famed Shakespearean actor Sir Henry Lee, a mysterious man named Ben who claims to be Roz's nephew, and a wealthy eccentric who lives in a town called Shakespeare, Kate travels across England and the US in search of answers, and finding mainly more questions.

Phew!  As you can probably tell from my summary, this is a complex book, but it doesn't feel that way while you're reading it.  An academic mystery about Shakespeare might sound staid and doddering, but believe me, it isn't.  It starts off with a bang and, even though it is a long book, goes by very quickly.  The characters are interesting, the facts about Shakespeare are surprising, the mystery is fascinating, and it's chock-full of fun and smart references to Shakespeare and his plays.

That being said, there were some major plot holes--shouldn't Kate need an ID to fly, for example?  I figured out who the evol villains were before page one hundred, and the story seemed to lose a lot of its focus when the issue of Shakespeare-might-not-be-Shakespeare-but-all-these-other-rich-famous-people-take-your-pick popped up.  Sir Henry called that idea ridiculous, and I have to admit I agree with him.  When the book became more about that than anything else, I got a little bored with the whole thing.

Even with its problems, though, this novel is a lot better than similar novels I've read.  I loved the main characters, especially Kate, who is believably intelligent and stubborn enough to follow through on investigating the mystery (I also have to confess that I connected with her immediately because she wrote her dissertation on occult Shakespeare--I wrote my MA thesis on hermeticism in Giorgio di Chirico's work).  I loved the places Kate went to in her search for Shakespeare, and how obsessive and excited people still get over his plays.  My absolute favorite part of the novel, though, were the historical scenes from Shakespeare's own time--they were very few and far between, but they were the most emotionally engaging and striking part of the book.  I am definitely a hundred times more interested in Shakespeare now than I was a week ago!

I highly recommend this novel, especially if you're a fan of academic mysteries.  It picks you up immediately and doesn't loosen its grip on you for a long time.  And, unlike a few other academic mysteries I've read, in this one you do feel like the conclusion to the mystery is important and will matter, even to people who don't live to study the subject.