Odd and the Frost Giants by Neil Gaiman 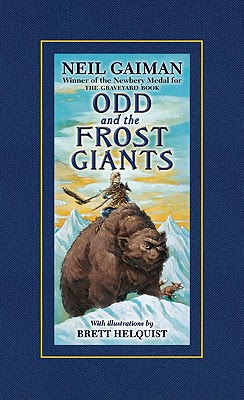 I rarely take much note of opening sentences, but this book has one of the best I've ever come across:

There was a boy called Odd, and there was nothing strange or unusual about that, not in that time or place.  Odd meant the tip of a blade, and it was a lucky name.

He was odd, though.  At least, the other villagers thought so.  But if there was one thing that he wasn't, it was lucky.

Is that a great set-up or what?  As the opening paragraph states, Odd is a boy living in a Viking village.  He has one lame leg and an infuriating smile, and at the end of one very long winter he decides to go off on his own to his father's hut in the woods.  There he meets a bear, a fox, and an eagle, and has many adventures.

This a great piece of storytelling, and I was continually surprised by the problems Odd encountered and how he surpassed them.  One of Odd's most unusual characteristics is that he doesn't let things bother him.  And even when they do, he just smiles.  I think this trait of Odd's is the most striking part of the book:  Odd has gone through a lot of crap--losing his dad, breaking his leg, being an outcast in his village, and then this adventure.  Through it all, Odd maintains his cool demeanor, even as the reader empathizes deeply with his losses and challenges.

I think this marks Odd as extraordinary because learning not to let bad things affect you--or at the very least affect your outward demeanor--and thinking through situations instead of just reacting to them is something we learn to do as adults (hopefully).  But for Odd, it's part of his essential make-up.  Even though he is a child, he's more of an adult than anyone in his village or even the beings he meets in the forest.  It's not until he leaves the village for the forest and then returns, that anyone realizes this, however.

Does this mean Odd doesn't change during the course of the book?  No.  He discovers new ways to see his parents and he finds out what makes us human.

This is a very short, entertaining little gem of a book I highly recommend.