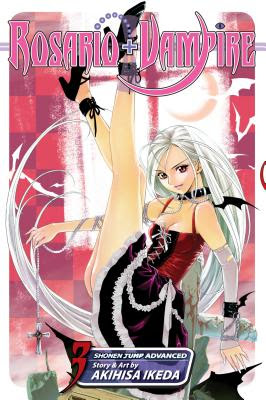 I'm happy to report this manga keeps getting better.

When we last left our friends at Yokai Academy--a school for monsters, where the only human is freshman Tsukune--our motley band of heroes was being threatened by the school "enforcers," who had discovered Tsukune was human.  Or had they?  After Tsukune is beaten up and comes close to death, Moka, a cute vampire, pumps vampire blood into his veins and suddenly he's totally kick-ass!  Yeah, Tsukune!!!  Of course, Moka still has to save him in the end, but at least he got in a few punches.

In the latter half of the manga, word has spread around the school that Tsukune beat up the school bully.  The captain of the wrestling team is shocked and wants Tsukune to join his team.  Being no dummy (unlike the captain), Tsukune refuses, which eventually leads to him getting another dose of vampire blood from Moka and kicking the captain's trolly buttocks.

What are the effects of all this vampire blood, you might be wondering?  Well, so far no one knows.  Tsukune himself doesn't remember becoming a vampire and the fact that Moka bit him without permission causes something of a rift in their relationship.  But don't worry, after a few minutes Tsukune appears to return to his completely normal, human self.

In the last chapter, Tsukune is tutored by the sexy math teacher who likes her students to be very, very obedient.

As you can probably tell, the characters are developing more now and the formula is starting to become interesting.  I have to say I found this volume to be very exciting and fun to read, and Tsukune is simply adorable.

So far this manga is definitely on an improving trend, and I can't wait to see what comes up in the next volume.