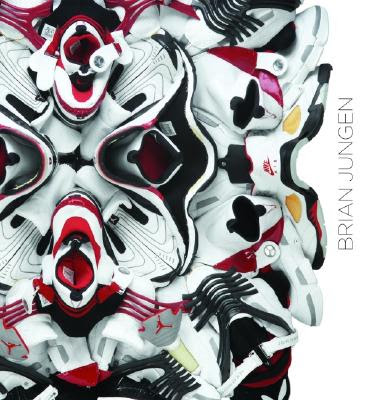 Brian Jungen is a Canadian with Native American/Swiss roots. His work is really awesome. Among his best-known pieces are his Prototypes of New Understanding, which are Air Jordans deconstructed and rebuilt into Northwest Coast masks. These pieces remind me of Germantown Blankets in that they show a piece of European-American culture deconstructed and rebuilt for specifically indigenous use (in theory, anyway--the masks are never actually used and Jungen isn't a Northwest Coast Indian--see below). Jungen has also taken things like plastic chairs and remade them into skeletons, baseball bats into totems, and IKEA boxes into bird habitats, among other examples.

This catalog, from a retrospective exhibition of his career, contains several essays grounded in theory and modern art criticism that talk about Jungen's work. I wouldn't call them widely accessible--they are self-consciously by and for the art world cognoscente--but I'm willing to forgive them because they do help one understand Jungen's works.

Jungen takes a lot of inspiration from minimalists (according to the book--personally I didn't quite see it, but what do I know about minimalism), but unlike true minimalists who don't want to tell a story, Jungen does. He also uses art to highlight social issues and make statements about the role of viewer/viewee, and all that post-modern stuff (can you tell I'm totally interested?).

The most interesting essay is, unsurprisingly, the one where Jungen himself talks about his art. He ignores all the po-mo theory and discusses how he was interested in animals from an early age, and his work is really all about animals. Maybe I'm just a bad art historian, but if he hadn't mentioned it, I never would have noticed how animals are the dominant theme in his art. Only one of the book's essayist even brought the subject of animals up, and that was very briefly, so I'm glad they included Jungen's interview. It makes the pieces seem much more personable, relevant, and "real" in way that all the essays based on theory--though impressive in their verbal gyrations--don't.

A very interesting, and odd, aspect of the book is the fact that no one ever mentions Jungen is not a member of the Northwest Coast Nations. His Native descent is from the interior of Canada and a tribe that speaks the same type of language as the Navajo, so he's not in any way related to the Native tribes of the Pacific Northwest. What implications does this put on his use of Northwest Coast masks in his Protos? No one in the book addresses this, and in the essay that focuses on the Prototypes, the author even says he's a Northwest Coast Indian, something that is completely false. In the US, this would be a Big Deal--Jungen is taking historical, religious and cultural symbols of a Native peoples he has absolutely no claim to and appropriating them for his own profit. Imagine if someone took Dooney & Burke bags and created representations of the Snake Dance with them. Yet this Canadian publication seems genuinely not to care and is only vaguely interested in his status as an American Indian anyway. I'm not saying it's a good or bad thing, just that it's something I found curious; and I can't help but wonder if Jungen would even define himself as an "Indian artist." Somehow I think probably not.

There is one thing I absolutely loved about this book--pictures! There are so. many. pictures. It's practically a photo album. It's about half as long as you think it will be because of all the illustrations of Jungen's work.

As far as reading this book, I would only recommend it to people with a vested interest in art--but if you're interested, you definitely should read it! And I highly recommend everyone make the effort to check out Jungen's work in a gallery or museum--his art is really cool and I think can be appreciated on a multitude of levels.