Cat Among the Pigeons by Julia Golding 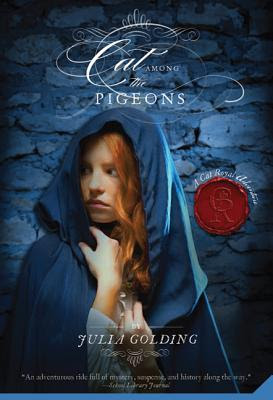 "setting a cat among pigeons" idiom; def.: to create a disturbance or cause trouble

Cat Royal proves once again she has a talent for getting into trouble. Her friend, Pedro, is being hounded by Kingston Hawkins, a slaver who claims Pedro is a runaway that belongs to him. Cat would like to help Pedro, but she can't, because she herself is hiding from Bow Street Runners after "attacking" Hawkins at White's and not only shocking the members of the club with her female presence, but cursing a blue streak at them as she left. How long can Cat stay hidden? And how can she and her friends save Pedro from being kidnapped?

This was such a great book, and I have very high hopes for the rest of the series--Harry Potter-sized hopes. It's that good. Since I was already introduced to the characters in The Diamond of Drury Lane, I fell easily into the action of the book, which has a better story line than Diamond did. Instead of feeling like it's going all over the place, here the plot is very focused on Hawkins' pursuit of Pedro (who has become a major London celebrity), and Cat trying to hide from the Runners and the absolutely amazing amount of trouble she gets into while she's doing it. This may sound like two divergent storylines, but they feel integrated into one. Part of the reason is because the threat to both Cat and Pedro is the same man, Kingston Hawkins; but there's also a definite parallel drawn between Cat and Pedro so that is seems like they share the same problem. Neither of them has any true rights and both of them are essentially powerless--and nameless--in the eyes of the law. Hawkins can get Cat sentenced to death as easily as he can claim Pedro as his personal property. The only thing the two kids have going for them are their friends (and fortunately they have very good and powerful friends) and their nerve. Golding had a similar message in Diamond, but Cat gets it across much more elegantly by showing instead of telling us about these inequalities.

A heroine who's constantly getting into scrapes probably sounds like a cheesy narrative device, but with Cat it feels absolutely organic to the story. I loved the spots Cat chose to hide--they were so unexpected and such unique locations. I can't recall ever reading a novel where the heroine goes to the places Cat does in these books.

Furthermore, like its predecessor this novel is witty and funny and smart. I felt the relationships described between the sexes was particularly perceptive here--we get a lot more of Frank, heir to the Duke of Avon, as well as some of his friends; and the difference in the way the boys behaved when they thought they were just among boys and when they were with girls was incredibly interesting. Not to mention the fact that Frank and his friend Charles are pretty hilarious.

Speaking of boys, Billy "Boil" Shepard is back in Cat, and I have to say I think he's my favorite character. Billy has expanded his interests since Diamond and now fancies himself a respectable businessman. Cat remains doubtful and still pretty much hates him, but is perturbed by his obvious fascination with her. And who wouldn't be? He did try to kill her, and he does run a notorious gang of criminals. But in Cat we begin to get the sense that Billy's perhaps not as much of a heartless guttersnipe as he appears. Or maybe he is and he's only pretending to be just-this-side-of-hell-bound to attract Cat?

The only thing I didn't like was that ending seemed very rushed and convenient, and the epilogue was one of those where everything is metaphorical pixie dust. But other than that, this was another very quick, entertaining, and well-penned novel. Now that I've read a little further, I'm beginning to get the sense Golding knows exactly where she's taking us with these characters, and I can't wait to find out where that is. Besides, I want there to be someone I can reference the Captain Benington-Smythe maneuver to who'll know what the heck I'm talking about.