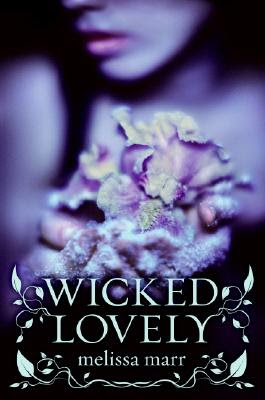 I've blogged about love triangles in YA novels before, and how they always seem to boil down to the guy friend versus the hot guy. But Wicked Lovely by Melissa Marr changes this paradigm up a bit: the main character, Aislinn, lusts after and wants to be "friends" with both Keenan, the faerie prince, and Seth, the tattooed and pierced human. So what will separate these two suitors in Aislinn's mind? The answer is masculinity.

Seeing as how Keenan is a fae prince with numerous magical powers, as well as the authority to command all of the summer fae, one would think his masculinity would at least measure up to Seth's, if not exceed it. Instead, his "manliness" is almost nonexistent. He's metaphorically emasculated by his mother--stripped of all his power and ability to act--several times in the book. He can't protect Donia, one of his former paramours, from his mother's retaliation, and needs a woman--Aislinn--to come into his full powers. Even with Aislinn, however, he's not the one in control: once Aislinn realizes she's the Summer Queen, she intimidates Keenan and basically calls all the shots, forcing him to play a supporting role. Keenan's attempts to assert his authority backfire and end up as laughable, since he hardly has the conviction to enforce rules or punish anyone, least of all Aislinn.

Keenan is disheartened when he first realizes that even though Aislinn has decided to be the Summer Queen, she's not his queen--she just wants them to be friends. Work friends, as she puts it. This isn't because he has any personal feelings for her (he's obviously still in love with Donia), but because Aislinn's refusal to let him sexually dominate her robs him of the power he was clearly anticipating coming into with the discovery of his summer queen. Although we're told Keenan has had countless love affairs with mortals in the search for his queen, during the course of the novel we never see him successfully pursue a female, and it's difficult to imagine him having sex at all because his character is so powerless and unassertive. The examples of women from his past, the Summer Girls, are all ditzes who will sleep with anyone, so clearly not a comment on Keenan's personal magnetism; and even Donia, who tells him she loves him, only allows him to sleep with her because she knows it will be advantageous, allowing her to manipulate Keenan in the future.

Seth is also a serious ladies' man, with many conquests and one-night stands to his name; but unlike with Keenan, we can believe it of Seth even though we never meet his previous conquests. He lives with complete autonomy, in his own home which is filled with symbols of his strength, sexual prowess, and ability to protect. The walls of his home--which he made himself (definitely a provider)--are made of steel, keeping out all the fae except those of the royal court and thus protecting him and Aislinn. He is constantly feeding Aislinn, and can also take care of other creatures, as evidenced by his huge pet snake that likes to nestle in Aislinn's lap (! my, Seth, what a large friendly snake you have). Seth immediately demands respect from those around him, including Donia and Keenan, though he is a mere mortal. Sexually, he exhibits control, never forcing Aislinn to acknowledge their attraction and even delaying the consummation of their relationship when she wants to have sex.

Seth has other personality traits that differentiate him from Keenan and mark him as more of a man, while Keenan remains a boy. He's responsible, supportive, makes measured decisions, doesn't give in to emotions like panic or anger, and has a wide variety of interests and skills.

Themes of masculinity aren't unusual in narratives, but why have them in a book written by a woman and marketed to young girls? What does this market care about symbols of masculinity? Aislinn has to make a choice about what sort of mate she wants in life (especially now that her life is the long one of the fae), and clearly the masculinity of the characters is how she does it. What girl wouldn't take Seth over Keenan? Perhaps the love triangle paradigm of love versus friendship is in reality a veiled message about masculine traits that one should search for in a mate; in that case, one has to applaud Marr for her interpretation of desirable masculine characteristics.