Love In the Afternoon by Lisa Kleypas 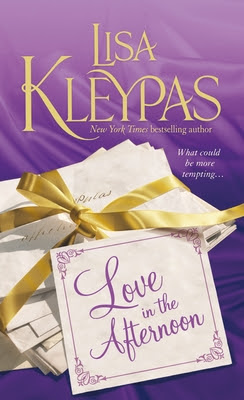 Now that I've gotten that out of the way, perhaps I can tell you about this book a little more calmly. This is the final book in the Hathaway series, about the crazy 19th-century English family that keeps marrying for love. What will they think of next? I just don't know! In volume five, the sylvan Beatrix falls in love with Christopher, a Crimean War vet with PTSD. Beatrix has avoided Christopher ever since she overheard him saying she belongs in the stables, but when his shallow almost-fiance (whom Beatrix strangely has no problem hanging out with) refuses to answer his letters from the front, she decides to do it herself. They fall in love via post but Christopher thinks he's in love with Prudence the social butterfly, not odd animal lover Beatrix Hathaway. Boy, is he in for an unpleasant surprise!

This novel felt a little clunky and I think it's fair to say it's the worst volume in the series. Not that I hated it, but there were just so many problems and it needed to be edited down and then built back up. First and foremost are the letters--it's not that I don't think people can fall in love through letters, but I can't see them falling in love with the letters that are exchanged in this book. They're short and to the point and kind of impersonal, almost like an e-mail conversation. I could tell Kleypas was really not into it. Fortunately, despite the fact that these two fall in love by writing to one another, the letters are a very short portion of the book--I have to wonder, why bother to include them at all?

The real story starts when Christopher returns to Hampshire, determined to marry the love of his life, aka Prudence. In the meantime, he's one of England's greatest heroes, his brother died, and his mother hates him. Drama! Oh, and he also has a cute dog that Beatrix insists on helping named Albert. Christopher found Albert guarding the body of his dead master on the battlefield and adopted him. Soon Albert was carrying messages for the Rifle Brigade and became Christopher's best friend. Isn't that sweet? And this story is actually based on a real dog from the Crimean Wars!

Anyway, enough about the dog. Terriers are such a great breed, but that's beside the point. I enjoyed the first part of the book, but after Christopher realized it was Beatrix who really wrote the letters, the story lost a lot of narrative tension. Toward the end it had pacing issues, as well--for example, the return of one of Christopher's friends was reeeally interesting, but it was given about a page and a half while other parts of the story I honestly did not care about dragged on and on. Admittedly, most of these parts had to do with sex. And, okay, the sex was kind of hot, but I was really more interested in the characters.

Basically, Love In the Afternoon wasn't a complete dud of a read, but it definitely didn't have the same feeling of charm and energy as the previous Hathaway books. Still, if you're a fan of the series, you'll want to read it.


For more images from the book, check out my image board at PInterest!