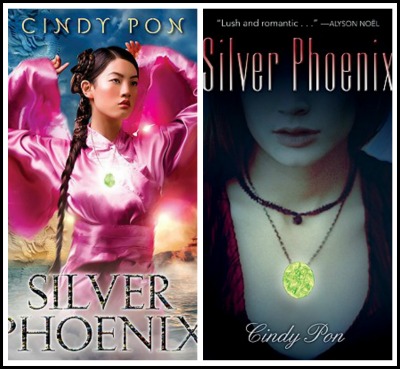 Through a bizarre series of circumstances, Ai Ling is an unmarried seventeen-year-old in olde-timey China. When her father goes missing, she decides to find him. Along the way, she encounters many demons and a few friends, especially Chen Yong, a young man with mad fighting skills. Why are so many demons targeting Ai Ling and her companions? And does Chen Yong really like-like her? Questions!

Silver Phoenix--or, to be more precise, its cover--is one of the more infamous incidents of white washing by the publishing industry in recent memory. Ai Ling is Chinese and her adventure is set in China, something that's very clear in the hardback cover and very unclear in the paperback cover. Apparently the sales of Silver Phoenix were lower than expected and Barnes & Nobel even refused to carry it. The publisher decided this was because readers are racists (or, at the very least, xenophobes) and revamped the cover with something less obviously "ethnic."

I don't know if this marketing strategy worked, but I don't think the lack of sales for the book had anything to do with the hardback cover (which is gorgeous, anyway). People may be pretty shallow, but it's still what's between a cover that really matters.

This novel starts off really great. It's one of those books that doesn't really start at the beginning, which regular readers of this blog know is one of my pet peeves. But the unofficial prologue was interesting, and arguably pertinent to the story, so I didn't mind it as much as I usually do. Plus, once the book did get going, it didn't let go. There was always something exciting happening. I loved the tone of the narrative, the sense of adventure, and the characters Ai Ling met--especially Chen Yong. They meet some wickedly cool things in this novel: dragons! Goddesses! Myths that come to life! It was like a book version of Crouching Tiger Hidden Dragon, which in my world translates to a way more awesome version.

But then, about a third of the way through, I started to feel like Ai Ling's journey was becoming episodic. It didn't seem like her meeting with demons or various people was moving the story anywhere. Once the plot did make an appearance, it was a little late to capture my attention and too thin to support the entire length of the book. I also felt like the character development had stopped and Chen Yong had become more of a convenient plot device than an actual character.

A little past the halfway mark, an incident occurred that was clearly meant to give some emotional heft and depth to the story, which it definitely needed. But to me the decisions made by Ai Ling's character and didn't make any sense. It also didn't fit in with the tone of the novel up to that point. It was then that I pretty much lost interest--I didn't care about the characters at all anymore, and now they were TSTL on top of it.

This isn't a bad book, but I don't think its audience is as "young adult" as what it's marketed to. If it is YA it's definitely for the Y end of the YA crowd, and in actuality is probably suited more for a MG audience. The story is very light and exciting, but doesn't contain a lot of emotional resonance, and I personally don't think there's a lot of adult crossover appeal.

Just to be clear, I picked this book up because I wanted to read it and have ever since it came out, not because of the cover controversy. Pon is a good writer and I think this story had potential, but was forced into a box that it didn't fit into.

Musical notes: "Bring Me To Life" by Evanescence