Originally Released: 11/18/2011
Starring: Taylor Lautner, Kristen Stewart, Robert Pattinson, also did I mention Taylor Lautner?
Directed by: Bill Condon
Based on: The novel of the same name by Stephenie Meyer

If you go to the theater expecting this movie to be "good," I really don't know what to say to you other than, Have you seen any of the last three movies? Look, there's basically two ways this is going to go: either it's a manflesh fest during which you spend two hours giggling at inappropriate moments, OR it's boring. I'm happy to report I found this movie pretty freaking hilarious. And RPatt and Stewart don't even act as badly as they did in the previous films! WIN. 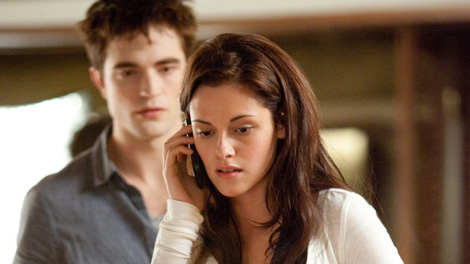 Let's recap the highlights! Reasons why you should see this movie on as big a screen as you possibly find, maybe even 3-D:
Now the real question is, what happened in the second half of this book again? Because it seems like they covered 80% of it already, other than Bella yelling at Jacob because he imprinted on her 10-minutes-old baby. I'm guessing there's going to be a lot more of vampires punching wolves in the snout and wolf MINDSPEAK. Also probably more kissing.
at 12:56 AM