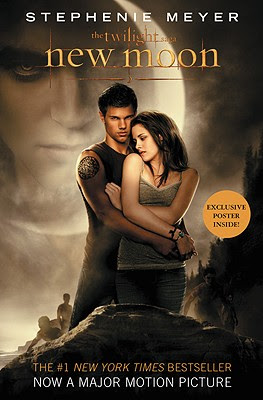 After seeing Twilight (the movie) on TV, I felt the need to bleach Kristen Stewart's quote-unquote acting from my mind, but I've already read Twilight (the book) three times. So decided to reread New Moon, instead. Bonus: my mom bought me the new edition after I casually mentioned one or six times how incredibly hot Taylor Lautner looked and how I would buy it just for the cover art ALONE! Exclamation mark! Look at him, all muscly and tanned and protecting Bella from the man-with-too-much-eye-make-up-in-the-moon. I think my favorite part of this cover, though, are Jacob's fellow tribesmen looking like they're climbing out of the primordial ooze, protozoic beings not yet evolved into humans. Subtle as always, Hollywood!

To be honest, I never planned on rereading this book, because it's a little hard to take. If any of you have suffered from depression, Bella's reaction to Edward leaving is all too easy to relate to, and I don't think the payoff is that satisfying. There are moments in this novel when it's absolutely impossible not to hate Edward, who not only leaves but takes away Bella's family and the entire future she's dreamed for herself. It takes most of Eclipse for Edward to fully redeem himself for that. Despite that and the fact that it's way too long, however, the novel ends up working. After rereading it, I can see that Meyer put a certain amount of literary ambition into this one.

Once upon a time, there was a young girl who lived at the edge of a great forest...
Like many romances, these books are based on fairy tales. But if Twilight was based on Cinderella--complete with a ball at the end--then New Moon is based on Sleeping Beauty. Bella says several times that she's asleep, and the course of the novel is about her waking up. At first glance, one might assume that Jacob is the prince who wakes her up--but he's not. Bella wakes up before she sees Jacob, when she goes to Port Angeles with Jessica and hallucinates Edward's voice for the first time. "...whether it was the zombies, the adrenaline, or the hallucinations that were responsible--it had woken me up," she says.

That sentence is significant because while Edward is still the fairy tale prince, just as he was in Twilight, he's not the one who saves Bella. She knows she's hallucinating when she sees him and that his voice is only in her own mind. It's actually Bella who wakes herself up--she's the one who decides to buy the motorcycles, she's the one who asks Jacob to fix them, and she's the one establishing the rules of their relationship. She makes the conscious decision to reestablish connections with her friends and family and not go back to the numb sleep-walking state she was in before.

She's also the one who saves the prince at the end of the story, not vice versa. So while New Moon is based on a fairy tale, it also turns the conventions of that fairy tale around. Bella's the hero of her own story, not Jacob or Edward.

Jacob Black: Convenient Plot Device
Speaking of Jacob, you've got to feel for the guy. In Twilight he was a convenient plot device used to clue Bella into the fact that the Cullens were vampires; and in the rest of the series (which, let's face it, is really just the first book re-written with a love triangle and werewolves) he basically serves to help Bella find dangerous things to do, rebel against Edward, and keep Renesme from being eaten by the Pack. But on the plus side, at least he's a convenient plot device with a personality.

I know there are a lot of people who are Team Jacob, especially after New Moon (the movie), which is understandable. But really there was no way he and Bella were ever going to wind up together. I take that back--there might have been a chance if he'd stayed human. But as soon as he turned into a werewolf there wasn't, and I would go further to say that's probably a good thing. As Bella says, "He was not my Jacob," the one she knew before he became a werewolf. The human Jacob had a crush; the werewolf Jacob is closer to obsessed. And Bella only 'needs' him because he keeps the yawning nothingness away, so she's essentially using him. That's not the greatest basis for a relationship.

Past Hope, Past Cure, Past Help
There are a lot of references to Romeo & Juliet in this novel, which I think is quite effective. Not because it feeds into the whole star-crossed lovers thing (since the books have a happy ending that's not very convincing), but because thematically Romeo & Juliet really informs what's going on in this novel.

What was Romeo's and Juliet's major downfall (aside from the fact that they were impatient and overdramatic teenagers with no life experience)? They had no faith in themselves and the people around them, and lost hope that the situation would end favorably. Admittedly, it is pretty difficult to maintain hope when your wife's lying in a coffin, but still. If Romeo had kept his faith in Juliet, then a lot of the things that led to the tragic ending would have been avoided.

Edward and Bella have pretty much the same problem. Edward has very little faith or hope for himself, which is why he leaves at the beginning of the novel. What he does have is destroyed when he hears that Bella killed herself. Bella likewise had little faith that Edward loved her as much as she did him; but it's because Bella allowed her hope to survive--pursued it, in fact, in the form of her hallucinations--that things worked out. During the brief moments when she considers "acting like a grown-up" and being with Jacob, she's really considering giving up hope. It's not Edward that haunts her nightmares but a world without hope.

1 Corinthians 13:13 is one of my favorite quotes ever: "For there are these three things that endure: Faith, Hope and Love; but the greatest of these is Love." Love may be the greatest, but I've always personally believe faith was the most important--because without faith, love can't survive. Meyer seems to be arguing something similar in this book: that hope is the most important, because without hope nothing can endure, not love and certainly not the people who are searching for it.


Although I know there's some controversy regarding Bella's independence, or lack thereof, in New Moon, on the second read I found her to be much stronger than I expected. She fights back against the existential nothingness and chooses to create meaning out of her shell of a life. I would never go so far as to say New Moon is empowering, but I do think the novel makes an argument for the power of faith, hope, love, and never giving up on your dreams, which to me seems a pretty positive message.


Musical notes: "Where is My Mind" by The Pixies