The Sunday Salon: A Literary Hard-On 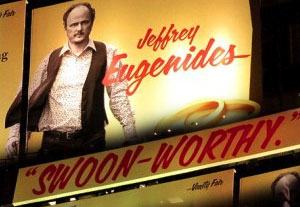 The billboard in Times Square for Eugenide's The Marriage Plot screams, "Ladies, lend me your panties!"

Do you all remember #pantyworthy? It was several years in the past, which is dinosaur years by interweb standards, and was a twitter hastag started by Rebecca from The Book Lady's Blog when she declared John Irving's books got her so excited he was worth tossing her panties at à la a fangirl at a Tom Jones concert. This started a twitter thread about authors who, as Rebecca put it, "had a certain je ne sais quoi" and spawned a series of photographs and a Readathon mini-challenge. You can read Rebecca's history of #Pantyworthy here.

The first comment from that post, by Bookybeck: "I still can’t shake the implications, though, and have trouble applying the tag to women’s book [sic]..."

Indeed. #Pantyworthy may have been just be a silly, fun thing on the intertubes, but it also excluded, by its very nature, women authors. It should come as no surprise that all of the authors Rebecca mentioned in that post were men. Fast forward to the present and you now have Jennifer Weiner, of #Franzenfreude fame (and also a very successful author, p.s.) yelling at #FridayReads and Book Riot (both of which involve Rebecca as a contributor) for being publishers' bitches and favoring male writers over female writers.

I get that sex sells, and that creative men are sexy. But in an industry where women outnumber men as both consumers and producers, the amount of attention men get in acknowledgment, promotion, and professional respect is noticeably disparate. JK Rowling may be one of the most famous and successful authors in the world (a smidge behind, along with everyone else, James Patterson), but her publisher made her use initials on her books instead of her name because they didn't think boys would read the series otherwise.

Interestingly, the only segment of the book industry that I know of where this isn't the case--where male writers are actually pressured to take on female nom de plumes and the male market is completely disregarded--is the romance genre, and I've already addressed my concerns over how romance is marginalized in both the market and in book blogging.

This is an extremely complicated issue that will probably never go away. I doubt we'll ever live in a "post-sex" society. And Weiner probably could have expressed her annoyance in a better way. But that doesn't mitigate the fact that she has a right to be angry and frustrated; what's amazing is that more female writers aren't equally so. This isn't about who writes better or worse, it's about institutionalized sexism. Somewhat like #pantyworthy, publishing was built to include certain people and exclude others, just like any other institution you run into. Unlike a twitter hashtag, however, once an institution takes on a rule or a tradition, it's hell on wheels to undo it.

Publishers use sex to sell to women all the time, quite successfully--and definitely not just with romance novels, as the billboard for Eugenide's The Marriage Plot in Times Square suggests--but if you're a female author writing what Eugenides or Irving does, and your audience is largely other women, there is no je ne sais quoi. Tossing your panties at or literary crushing on another woman is just awkward (especially if you're straight, but probably still even if you're not). And guys can't do the equivalent because then they'd be objectifying women (not that the publishing industry assumes men will read books written by women, anyway--see JK Rowling, above).

But I say unto you, oh publishers of books, why not market a female author to men the same way you would market a male author to women? Just to see what would happen. Sex her up like a bookish version of Angelina Jolie; try to give men as big of a literary hard-on as you try to give women, and then let's talk. I want to see a #whistleworthy hashtag in 2012!