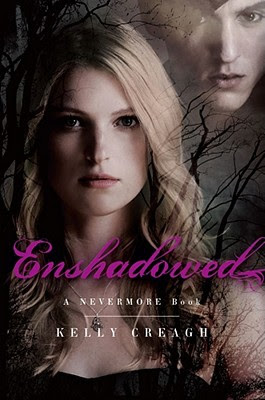 After leaving Varen in the Edgar Allan Poe dreamworld, Isobel has not moved on with her life. Instead, she's spiraling into a depression and has horrible dreams. If only she could find a way to be in Baltimore on Poe's birthday, she might be able to convince Reynolds to show her a way back to the world she left--for good reason--in the last book.

I really enjoyed Nevermore by Kelly Creagh when I read it a few years ago (review here), so I was super-excited about the planned sequel, Enshadowed. Nevermore had everything: a broody, Snape-like hero; the big dance at the end where EVERYTHING HAPPENS; poetry (you guys know I love it when characters quote poetry); a Gothic atmosphere; and a romance where the hero and heroine fight. The only thing I didn't like about Nevermore was the last third of the book, which was all about "nocs" and the spooky Poe dreamworld. It felt tacked on and completely nonsensical. Plus, Varen (aka Young Snape) was not in it.

The thing about Enshadowed? It's basically the last third of Nevermore, but spread out over another 500 pages.

I still enjoy Creagh's writing style, and for about the first 100 pages Enshadowed I was completely gripped by the story. I loved Isobel's brother and their interactions, and I liked the idea of setting the book during Christmas while Isobel's on break. BUT. The spooky incidents that lead nowhere started to get really repetitive, really fast, especially as they were pretty dang corny: The TV that plays a static-y black and white video clips. Shadows on the wall. Books o' mysticism. The ethnic minority who knows way too much about demons. Also, THERE WAS NO VAREN. Instead, Isobel hangs out with this girl named Gwen, whom I honestly do not remember from the previous book at all.

But the real drag on Enshadowed is that this is not a story. Or if it is, it's a short story, and one about which I probably give only a marginal shit. The actual story lies with Varen--he's the one trapped in Poe World (coming in 2013, brought to you by Dickens World) with a demoness. What's he doing to get himself out of this mess, hmmm? What if he likes it there? Reading about this story from Isobel's perspective is like reading about Harry Potter from the perspective of Mrs. Weasley. SHE'S NOT EVEN AT HOGWARTS. You get what I'm saying?

Enshadowed wound up being extremely skimmable, and I'm very happy I waited for it to come in at the library rather than shelling out money for it. Based on the (rather ridiculous) cliffhanger at the end of Enshadowed, I'm guessing there's going to be a third book in the series, which will hopefully be better.