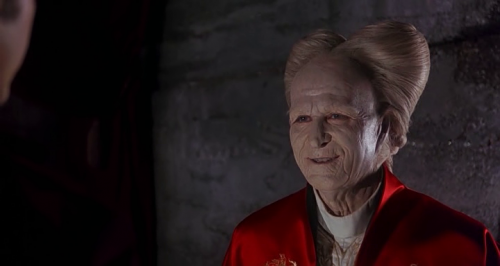 It's not that I pay particular attention to food mentions in books (honest), but in some novels the characters talk about food so often it's impossible not to notice and be slightly weirded out. The Chicagoland Vampires series by Chloe Neill, for instance. And, another vampire book (coincidence?), Bram Stoker's Dracula.

Here are just a few of the food mentions from the part I've read so far (basically Jonathan Harker's journals):

I dined on what they called "robber steak"--bits of bacon, onion, and beef, seasoned with red pepper, and strung on sticks, and roasted over the fire, in the simple style of the London cat's meat!

The wine was Golden Mediasch, which produces a queer sting on the tongue, which is, however, not disagreeable.


I had for dinner, or rather supper, a chicken done up some way with red pepper, which was very good but thirsty. (Mem. get recipe for Mina.) I asked the waiter, and he said it was called "paprika hendl," and that, as it was a national dish, I should be able to get it anywhere along the Carpathians. [Apparently this is actually chicken paprikash.]


I rejoiced to see within a well-lit room in which a table was spread for supper, and on whose mighty hearth a great fire of logs, freshly replenished, flamed and flared.

The count himself came forward and took off the cover of a dish, and I fell to at once on an excellent roast chicken. This, with some cheese and a salad and a bottle of old tokay [Tokaji wine?], of which I had two glasses, was my supper.


He took my arm, and we went into the next room, where I found an excellent supper ready on the table.


I had for breakfast more paprika, and a sort of porridge of maize flour which they said was "mamaliga", and egg-plant stuffed with forcemeat, a very excellent dish, which they call "impletata". (Mem., get recipe for this also.)*


DOOD, SLOW DOWN. Who does Jonathan think he is, Anthony Bourdain? I swear to god all he does is eat. And what the heck is forcemeat? (When I first read that I thought I thought it said "horsemeat" and I seriously wanted to throw up. Maybe it's related to empenadas?)

Anyway, because I'm me, I have to wonder--why all the food mentions? Here are some possibilities I've come up with:
Take, for instance, Jonathan's encounters with the vampiresses, where they "licked their lips like an animal" and sent him into a major spaz attack. Admittedly, that's pretty easy to do with Jonathan, but I think it's clear they think he's appetizing. IF YOU KNOW WHAT I MEAN. I think, too, all this eating eating eating sets the stage for Jonathan's paranoia that he's about to be the Count's dinner.

Have you ever read a book where the food descriptions seemed out of control, and was it by any chance a vampire novel? Because so far all the ones I can think of are.


*Dying--har har--to make some of these dishes yourself? There's an excellent blog post with the recipes Jonathan mentions at Her Raven Domain.
at 1:43 AM