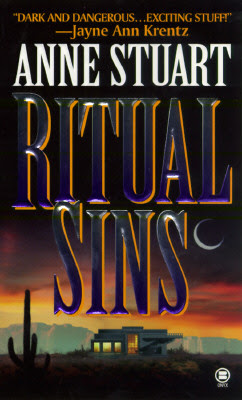 When Rachel's mom dies suddenly of cancer and leaves all of her considerable fortune ($12 mil) to a cult called The Foundation of Being, Rachel is pissed. She travels to New Mexico to confront the leader of the Foundation, Luke Bardell, a charismatic ex-con. There she discovers Luke is anything but the spiritual ascetic he pretends to be, and that everyone at the Foundation of Being is a FREAKING PSYCHO.

The premise of Ritual Sins is pretty far out there, and I love it. How many romances do you come across that take place in a New Age-y compound where the hero is the leader of a cult? Not that many! Of course, most writers would have trouble making a hero such as Luke appealing, but since this is Anne Stuart and bad boys are her raison d'etre, she knocks it out of the park. Luke reminded me of Paul Newman in Cool Hand Luke, only after he got out of prison and started another con in the middle of the desert.

I was really enjoying Ritual Sins for about the first half, but then Luke and Rachel leave the Foundation of Being, and it totally threw me out of the story. I almost gave up on the book at that point, in fact, but was in the middle of a bout of insomnia and figured I might as well keep going. The second part of the book isn't bad, it just takes a while to get reinvested in what's going on, and the information we're given really isn't, to my mind, that important. I don't need to know any more details about Luke's shitty childhood than I was already given earlier in the book.

As for Rachel, she was an okay character, but it seems like these two have way too many problems between them, and I was never sure why Rachel was attracted to Luke at all.

And then they go pack to the Foundation (I don't want to say "and it's kind of like in Pirates of the Caribbean when they go back to the island," AGAIN--see here and here--but actually it's just like that) and there are SO MANY THINGS that make no sense. Luke is supposed to have the Foundation under constant surveillance and a killer instinct about people, but he had no idea what was going on, really? And why did all these people want to kill each other? Seriously, way too many murder plots running around this book. And why doesn't someone just call the police?

I really admire Stuart's guts and willingness to take chances in her writing, and I think Ritual Sins is a perfect example of those qualities. However, as far as this story goes, it's kind of disappointing. There are many books by Stuart that are more successful and probably better for those unfamiliar with her work to try out.
at 12:13 AM