Review: TELLING LIES FOR FUN AND PROFIT by Lawrence Block 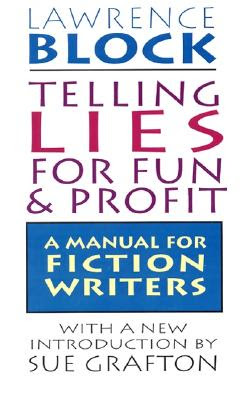 I wasn't going to review this book, even though I thought it was excellent. Why? It's definitely a classic and it's something I think every writer should read, but I'm not sure if non-writers would have any interest in it. Probably not. But then Telling Lies for Fun and Profit is so entertaining it might capture the interest of those who aren't its intended audience.

Lawrence Block published his first novel at the age of nineteen (a lesbian erotica, in case you were wondering) and has written about a bazillion novels and short stories since then, so the guy's walked some literary miles. Telling Lies for Fun and Profit is a collection of essays he wrote for Writer's Digest about the craft of writing, and they range from the philosophically abstract (like Sunday writers, see here) to the technical and specific (such as using pronouns, see here). Even though certain aspects of the book are dated (it was first published in 1981), there is a lot of food for thought in this book for writers to chew on.

Block himself says he sometimes contradicts himself (he does), and there are things I find hard to believe or just didn't agree with (no rewriting Block, really?), but agreeing or disagreeing isn't really the point of the book. Nor does Telling Lies for Fun and Profit aspire to teach anyone HOW to write a novel, though Block does offer his own ideas about that. Instead, as Sue Grafton puts it in the introduction, Telling Lies for Fun and Profit is a comfort read for writers--just like any of his fictional characters, Block makes his own experiences relatable and universal. A lot of books about writing only address the difficulties, with the end result of making aspiring writers eager to get a job in a retail or accounting. Block doesn't ignore the difficulties at all, but he does make them seem completely normal and, thus, surmountable.

Block's writing style is also really entertaining and fun to read. I LOL'd several times, and even when I wasn't, I was very engaged. Not to say this is an easy read--it took me about a month to work my way through Telling Lies because some of the essays are really challenging and take some time. But when I was reading I was completely entertained, not something that can often be said for non-fiction. There were also times when I felt like Block was being a bit patronizing toward women, but I'm going to write that off as more of a generational thing than misogyny on his part.

Anyway, I'm really happy I bought Telling Lies for Fun and Profit. It gave me a lot to think about, and was very inspiring. I can see myself rereading this over and over and taking different things away from it each time. I would recommend this book to anyone who considers themselves a writer.

Some passages I particularly liked:


...when I want to write and can’t write I find myself possessed of murderous rage.


I don’t finish half the books I start nowadays, and a good many get hurled across the room after a couple of chapters.

And his name is Dan Brown:


The unspoken premise in “I wish I had your self-discipline” is that anyone with my self-discipline could do what I do, that a persistent chimpanzee could match me book for book if he could just sit still long enough and work the space bar with his non-opposable thumb. [Did Lawrence Block invent the infinite monkey theorem?]

I had a letter just the other day from a woman intent upon keeping her true identity a secret not only from her readers but from her prospective publisher as well, and wanting to know how she could do all this without getting into a tangle with the tax authorities. I assume she has her reasons.

I’m not sure there’s any good sense in imposing questions of ethics upon a profession which has muddled along for centuries without any.

Years ago, when I spent a year reading slush at a literary agency, it sometimes seemed to me as though a full forty percent of the stories I read were entitled “As the Twig Is Bent.” Another thirty-five percent were called “So Grows the Tree.”


Is Twins a good title? Or The Thorn Birds? Or The Shining? How about Coma, perhaps the first novel ever named for what it induces?

On feedback and reviews:

If you can’t stand the heat, stay out of the kitchen. If you don’t want the peaches, leave off shaking the tree. And if you can’t bear disapproval, keep the stuff in a locked drawer.