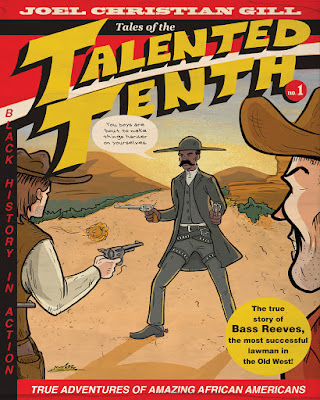 Obligatory disclaimer: I was provided with a complimentary copy of Tales of the Talented Tenth: Bass Reeves for the purposes of this review. All opinions are my own.

In this graphic novel, Joel Christian Gill tells the story of Bass Reeves, the first black US Marshal west of the Mississippi and, some believe, the inspiration for the Lone Ranger. 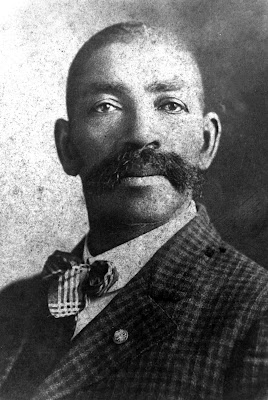 I'd heard of Bass Reeves before, on Drunk History, and probably elsewhere. I'm all for books about awesome historical peeps, and for the most part I enjoyed reading Gill's graphic biography of Reeves. The story was fast-paced, with a lot of tension, and I thought the artwork served the story well. I particularly liked how Gill represented the language of the Seminole Indians before Reeves learned how to speak it, and I thought the use of Jim Crow as a character was effective, if a little confusing at first.

That said, I did have a few niggling areas of concern:

I think for a younger audience, this will be a good intro to the story of Bass Reeves, and I'm definitely looking forward to more stories in this series. But this book is certainly not without a few issues.

To find out more about Tales of the Talented Tenth: Bass Reeves, visit its Indiebound and publisher pages, and check out Gill's website and Twitter account.

Thanks to Fulcrum Publishing, I have one copy of Tales of the Talented Tenth: Bass Reeves to give away. To enter, simply provide your name and an email address where you can be reached in this form. I will select one winner using random.org on March 5th, 2016. If applicable, international entries will be shipped at my own expense.