After the Kiss by Lauren Layne: Basically exactly like How to Lose a Guy in Ten Days.

Confess by Colleen Hoover: I like the inclusion of the art.

I don't normally read two romances at once, or even two novels at once, but for some reason this is working for me for right now.

I'm also listening to The Other Side of Midnight by Simone St. James.

BBAW-related posts included an introduction through book covers, an interview with Amanda from Fig and Thistle, the most memorable book recommendations I've gotten from other bloggers, and how to avoid blogger burnout.

Non-BBAW posts were my 1000th post on this here blog, and mini reviews of My Fair Gentleman, The Haunting of Maddy Clare, and A Shade of Vampire over at Book Riot.

It was okay. I expected it to be funnier because the trailer is hilarious, but the movie's real problem is that it's way too long. They needed chop about half an hour from this film to keep it moving along. And if the majority of that half hour consisted of the scenes with Colin Quinn, that would have been okay by me.

That said, Lebron James is SUPER funny. I could have watched a whole movie just about "My Best Friend Lebron."

In Your Eyes, starring Zoe Kazan and Michael Stahl-David

I'm thinking only Joss Whedon could get a movie like this made and have it turn out well. The plot is absolutely bonkers: two people separated by thousands of miles fall in love after forming an explicable telepathic connection where they can see, hear, and feel the same things as the other person. Oh, and did I mention the woman's married and the guy's an ex-con? There are a few head shaking moments, but somehow it works.

History of the Eagles, directed by Alison Ellwood

Fun fact: The Eagles are my favorite band of all time. I enjoyed learning about the origins of the band and all of their famous friends (Glenn Frey and Bob Seger were buddies when they were kids in Detroit!). Even though it's an "authorized documentary" produced by Frey himself, the guys are pretty honest about their past and when they acted like assholes. It was in the second half that I felt like there was some sugar coating of their comeback tours and new album, but whatever.

Don Henley had the best line of the whole film: "There's a fine line between the American Dream and the American Nightmare."

Aside from Book Bloggers Appreciation Week, I spent the week looking at mopeds. We went to a Vespa dealer and I tried one out and it was sooo cool. A little too pricey for me, though.

Do I need a moped? Can I afford a moped? Probably no to both questions, but sometimes I get this bug in my brain that I want something and then I feel the need to see it through. 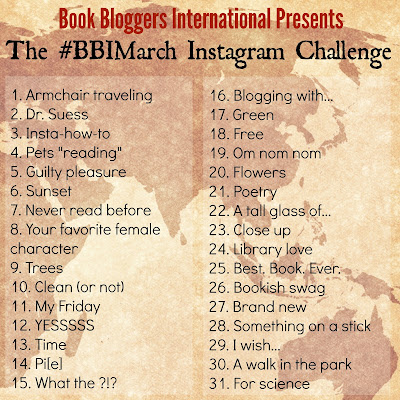 Starting in March, I'm hosting an Instagram challenge for Book Bloggers International. You can participate by posting something related to topic using the hashtag #BBIMarch. Photos will be featured on BBI's blog.

Have a great week!