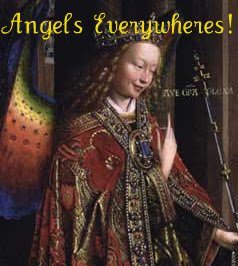 I haz been derelict in putting up my angelic links lately.  Since Angel Month is wrapping up quicker than you can spit (so to speak), I better get on the ball.


Remember, kids, when you click on a link, an angel gets its wings.