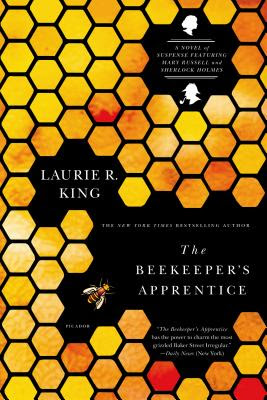 I started The Beekeeper's Apprentice because Ruth from Booktalk & More told me to, and basically I do whatever she tells me.  I'm very happy I took her advice, because this book was super-awesome!

The Beekeeper's Apprentice is about a young woman name Mary Russell in WWI England, who meets Sherlock Holmes (aka the beekeeper).  Holmes, the quintessential Victorian detective, has retired to the country, where he amuses himself conducting experiments with bees and chemicals and whatnot (not all at the same time... usually).  Russell declares she is not interested in bees because they're too much like humans, to which Holmes responds by saying that's probably why he's so fascinated by them (extended metaphor alert!!!).  Almost immediately thereafter, he decides to make Russell his apprentice in the arts of detection.

Russell spends her teen years being trained by Holmes before she goes off to Oxford, and slowly begins to assist him on cases.  There is no central mystery in this novel; mainly it's a coming-of-age story for Russell.  Several mysteries move the development of the characters along.  Usually I like my mysteries to be very, very focused; and I do have to admit that there were times when the lack of a focused mystery plot frustrated me.  But it's practically impossible to fault the book for that, since a more focused plot would not have allowed Mary's character to develop.  Also, this is one of those books where the best scenes are those that are completely unrelated to the plot--Holmes and his brother Myron having a totally pointless argument, Russell and Holmes' excursion to Palestine, etc.

In the actual Sherlock Holmes books, Holmes annoys me.  But in this book I loved him!  He was exactly the way one would imagine him, only better.  And the chemistry between him and Russell (which is non-sexual, just fyi) was great.

The thing that really cemented my opinion of this novel is that I was depressed when it was finished.   I wanted to spend more time with Holmes and Russell and Myron!  Fortunately, there are many more books in this mystery series, and I can't wait to read them.