Rules of Attraction by Simone Elkeles 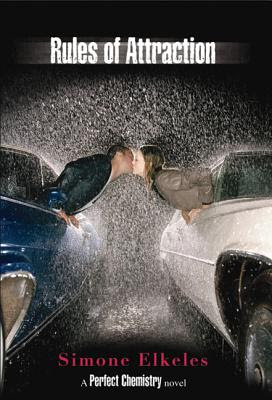 It's official:  Simone Elkeles is my new favorite author.

In Perfect Chemistry, we were introduced to Alex Fuentes (I won't tell you what his real first name is, since I know that will make you curse me for getting a certain song stuck in your head), who lived in the Chicago 'burbs with his mom and two brothers.  After the events in Perfect Chemistry, Alex's family moved to Mexico; but Carlos, the middle sibling, is getting into a lot of trouble, so his mom sends him off to live with Alex in The State of Boulder, where Alex is going to school.

Carlos isn't exactly happy about this (I wouldn't be, either), but there's a light beyond yonder teenage angst as he finds himself inexplicably attracted to Kiara, a student at Flatirons High who is assigned to show him around his first week of class.  After getting into more trouble, he convinces Kiara that they should pretend to be dating, for no logical reason that I could gather; but it's more like they're ACTUALLY dating, and P.S. he's living in Kiara's house with her parents and little brother, so that's kind of awkward.

I didn't like this book as much as Perfect Chemistry--the characters, especially Carlos, weren't as appealing as Alex and Brittany are; and the majority of the plot felt very unlikely, from the fact that Alex somehow affords his own apartment in Boulder (that mechanics job must pay a lot), to Kiara's dad turning out to be some kind of bad-ass.  But then I was probably biased by my aversion to Boulder.

That being said, I still really enjoyed it.  I stayed up until four in the morning reading after working all day, which doesn't happen to me that often.  Although Kiara and Carlos aren't as appealing as their collegiate counterparts, they are very well-drawn characters.  Carlos reminded me of my little brother so much and gave me a similar intense desire to shake some sense into him.  And while Carlos and Kiara don't have quite as much chemistry as Brit and Alex, a lot of their interactions were hilarious and simply fun to read.

And in case you were wondering, yes, the scene on the cover does happen in the book.

The ending is even more ridiculous than the ending of Perfect Chem, and is followed by a very disturbing epilogue that takes place twenty-six years later.  Twenty-six years!  I'll be ancient by then.  But then I started thinking--what if the epilogue takes place in the present?  Then the events of Perfect Chemistry and Rules of Attraction would have taken place in the '80s, which quite frankly makes a lot more sense as far as gangs, affordable housing, and being able to use one's locker in public school is concerned.

In any case, I must now read all of Simone Elkeles' books, because they are seriously fun and entertaining and unputdownable.  I highly recommend her books, but wait until you've read Perfect Chemistry before you pick up Rules of Attraction.