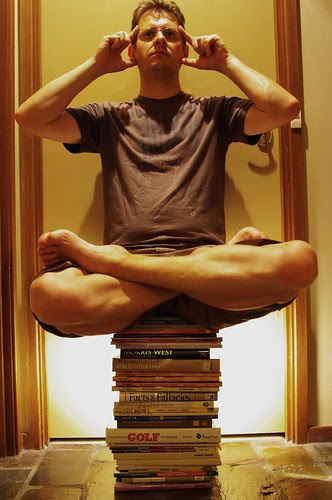 I've heard many bloggers say that they judge a book based on its own merits and not in comparison to other books.  I've even said this myself a time a two.  But why shouldn't we compare one book to another?  And is this impartiality in reviewing even an attainable goal?

Books, like everything else, don't exist in a vacuum--they work within genre tropes established by other novels, are published because certain settings or plots are popular, and both the author and the reader undoubtedly draw upon what they have and haven't liked in other stories.  All of this makes up a book, and I would argue for the most part it makes a book better.  Having the experience and knowledge of other books enables us to understand a new book and possibly get more out of it.  Furthermore, I don't think even the best reviewers can read a book without comparing it--any more than we can un-read a book!

For example, I remember reading a review of Garden Spells on Hey Lady! Watcha Readin'? where Trish said,

...while I loved this book, I have to admit that it’s not very deep and the book club discussion was uninspired. I saw a parallel between Garden Spells and my much loved Time of My Life, and was telling the group how I saw similarities in the book, but how TOML was much deeper and more profound than GS.

This is the perfect time to point out that my ratings of books are never meant to be compared to each other. Each rating is a stand-alone rating, in that each book is only compared to itself. If I was to compare Garden Spells with Time of My Life, GS would be rated pretty low, as TOML digs deep where GS just skims the surface. But since books are only compared to themselves, which is to say, are they the best they can be?, each book is rated on its own merits.


Even though Trish gave Garden Spells a great rating, she still couldn't help comparing it to Time of My Life and finding it wanting.  What if she had given it a poor rating because of that?  Would it still have been a "fair" review?

How about when an author invites comparison to other novels?  Pam from Bookalico.us has an interesting review of Knightly Academy, which the author calls Harry-Potter-inspired fiction.  Pam says,

I read it in a day and I am still having a bit of trouble disassociating this from the Harry Potter series. I could identify which characters were modeled after those in J.K. Rowling’s books and early on in the book I had figured out who had it in for the commoner boys.

Does this however make it uninteresting? To be honest I am not sure. I am really unsure of how to separate the two and when the author is up front with her intentions and it was very Potteresque. I feel a bit uneducated on how to judge a book that is inspired greatly on another book.

I would say, go ahead and compare it to Harry Potter!  Not only that, but I would point out there are tons of books that are very obviously inspired by other novels--Jane Austen adaptations, for instance.  Is it wrong to compare these books to their forerunners?  No, I think it's quite the opposite--not to do so seems lazy or as if you're only reviewing half the book.

I believe the idea of the impartial review is fundamentally flawed.  Writers are inspired by other books, and it's only natural for readers to compare to them to those books and others we've read.  It isn't in the what, but the how that stories become our favorite novels--so if someone writes a similar story, but in a better way, why not say so?  Because if you don't have something to compare it to, everything is at the very least acceptable.  It's only through an array of experiences that we develop a taste for what we think is good or not.


Do you try to judge books on their own merits and keep reviews impartial? Do you think reviews should be that way?