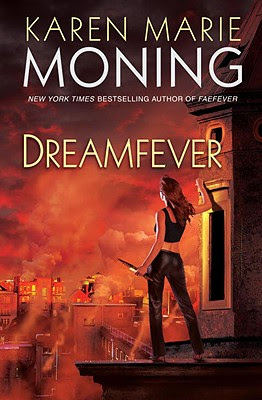 After finishing this book, the only thing I can say is... HOW IN THE NAME OF GOD AM I GOING TO SURVIVE UNTIL SHADOWFEVER COMES OUT IN DECEMBER????!?!?!?!1

Dreamfever is the fourth book in Karen Marie Moning's "Fever" series (that's not actually the series' name, it's just what I call it).  The books are really one whole story spread out across five novels, about a Southern girl name Mackayla Lane who travels to Dublin to search for her sister's killer.  In the process, she discovers that Irish legends about fairies are not only real, but much worse than the stories would have one believe.  It's only in this book that is becomes clear the Fever series isn't just an UF series, but a story of Apocalypse.

After Faefever, the previous novel in the series, I admit I was a little scared to read Dreamfever.  Faefever wasn't exactly my favorite book; and in addition, it ended on a pretty horrific note.  But after a bit of a rocky start, the story in Dreamfever settled in and started moving along.  A lot more things happen in this book than in the previous one, especially in regards to Barrons' and Mac's relationship, and there's also a lot more action in this novel.  Inspector Jayne rocks it out defending Dublin from the fae, V'lane has formed some interesting partnerships, and the Lord Master has some interesting revelations.  But the new major character in this book is Dani, another sidhe-seer who has become something of an adopted sister to Mac.

The overall story is okay--it's a quick read, although maybe not as un-put-downable as the earlier novels.  That is, until the end, which left me going, "Are you freaking KIDDING me?!?!?"  Literally, that's what I said at the end.  Let's just say it's a cliffhanger.

Dreamfever leaves us with a host of questions, such as:

And many others I can't mention for fear of dreaded spoilerage.

You know what all these questions remind me of?  Lost--endless questions and no answer in sight.  Hopefully the final book in this series will be better at providing answers than the Lost finale was!  Now I just have to dig deep for the patience to wait until December.