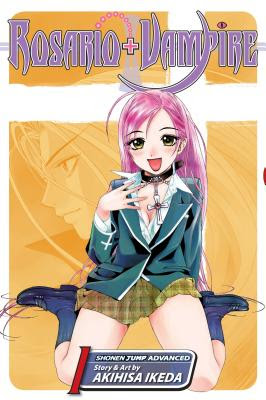 This is a very fun, cute manga, although it's insanely repetitive and I'm not sure I want to keep reading it.

Average guy Tsukune can't get into a decent high school, so he finds himself enrolled in Yokai Academy, the only place that will accept him.  At Yokai, Tsukune is anything but average--because he's the only human in the entire place!  Unbeknownst to Tsukune or his parents, Yokai is a high school for supernatural creatures who need to learn how to integrate with the human population.  Because of this, they're supposed to keep their monster identities under wraps--but very few of them can keep to this rule.

Fortunately for Tsukune and his continued bodily existence, the first day he arrives he meets Moka, a cute vampire girl.  Moka and Tsukune become fast friends.  Then for the rest of the series, Tsukune is lured into danger by some monster (usually female), Moka gets offended, then winds up changing into her kick-ass vampire form so she can save him from said monster.

I like formulas as much as the next person (perhaps more), but when a formula is already predictable and boring by chapter two, that's a problem.  This manga became repetitive very quickly, and while I really liked the characters and found Yokai Academy and the art work to be quite charming, I got pretty bored with the story line.

Another thing that started to bug me about this manga is how sexually objectified the young girls are.  There's an entire chapter where the plot revolves around peering up the girls' skirts.  It would be pretty obvious the author was male even if we didn't know who wrote it.  I also find it very interesting that all the girls at Yokai--who for the most part very sexually aggressive--are all MONSTERS.  Even though there's no overt sex in this manga, it's very sexually suggestive--but in strange, creepy ways.

I can see why this manga is so popular, but I'm not sure I want to continue with it.  Not because of the sexual objectification stuff, because that's a relatively minor part of the stories, but mainly because the formula is already wearing on me.  That being said, if I was younger I could see myself enjoying this series A LOT, so I think I actually would recommend it to people who are interested.