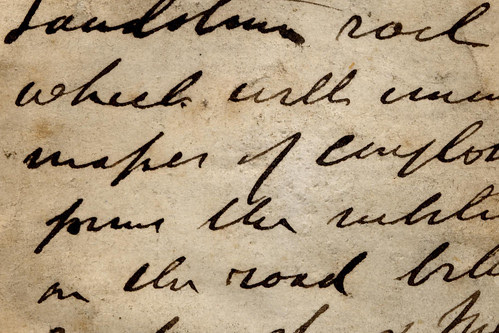 I've been writing letters lately to one of my long-time friends who recently got married.  I used to write letters a lot, but ever since the invention of e-mail, FaceBook, twitter, and the other things on the intrawebz... not so much.  However, my friend just happened to send me a letter at a moment when I felt like writing, and so we've been corresponding by snail mail for about a month.

Aside from making me feel delightfully anachronistic (next I'm going to get a rotary telephone and plug it into the wall), there's something different about writing out a letter than an e-mail or other forms of electronic communication.  With twitter, you only have 140 characters to make your point, so usually tweets are about actions: "Ate a sandwich," "Reading The Odyssey--does it rhyme?" and other such fascinating tidbits.  Even e-mails tend to be short and straight to the point--you find out what the person wants to know, and you tell them.  The end.  Long, rambly e-mails typically annoy people.

While writing a letter, however, there seems to be more room for self-reflection, perhaps because it takes more time to write it out long-hand; or maybe because you've slotted time to just sit down and write, whereas things like e-mail and twitter are usually slotted in between actual "work" (which could be anything from Farmville to accounting) you're doing on the computer.  Also, even though letters have an audience, since you don't receive their reply for a long while it's kind of like talking to yourself.  Because of that, it seems like letters reveal more of the inner workings of the writer's mind than most other types of writing.  And rambly letters are the best kind of letters to get!

I read a quote recently--I can't remember where, I think it was on You've Gotta Read This--that the difference between movies and books is that books use the inner workings of the mind (and words, obviously) to create images, while movies use images to imply the inner workings of the characters' minds.  And while I'm not a big fan of epistolary novels (mainly because I'm worried there will be a lack of narrative), I think that's a big part of their appeal--letters are all about the inner workings of the writers' mind, and trying to convey that single view to another person.  In fact, letters may be writing in its purest form in that respect.

If you've read epistolary novels, what do you think their appeal is? Why would someone want to read someone else's letters?