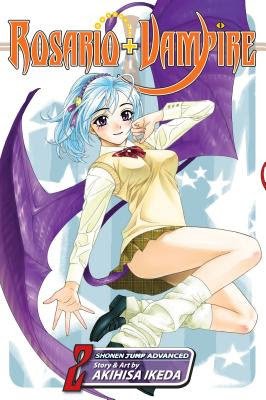 I've said it before and I'll probably say it again:  manga is some subversive shit.  At least by US standards.

You might recall that after I had finished Volume 1 of Rosario + Vampire, I was on the fence about continuing the series.  The stories were just too repetitive.  But one of my lovely blog readers told me the series improved, so I decided to give Volume 2 a try--and if this volume is anything to go by, the series definitely gets better!

In case you missed my first review, the manga is about a normal human boy, Tsukune, who attends a school for supernatural creatures.  Since no one is supposed to reveal their inner monsters, no one knows or suspects that Tsukune is human, except for Moka, a beautiful vampire whom Tsukune met the first day of school and has been crushing on ever since.

While the first chapter (or test) in this volume was still a little formulaic, the plot is clearly starting to get more varied as it centers on the group of friends that make up the newspaper club, which Tsukune and Moka started along with Kurumu, a succubus who is in love with Tsukune (and the girl on the cover of this manga).

In "Love Is a Witch," Moka is stalked by an 11-year-old bisexual witch who keeps squeezing her breasts.  She wants Moka all to herself, so she tortures Tsukune with voodoo and other magic, making him flip up Kurumu's skirt and show the reader wayyy more than I needed to see.  Everyone is annoyed by this little witch except Moka, who understands what it's like to be alone.

In "The Art of the Birthday" (creative title), Tsukune is having his birthday and wants to tell Moka he loves her on his b-day.  But Moka's too busy modeling for art class and the seriously creepy art teacher.  "You're so pretty, just looking at you makes me want to create art," she purrs.  Meeeeanwhile, girls are disappearing from the school, so it's creeptastic all around.  Is Moka in danger?  And will Tsukune man up and profess his feelings for her?

For "Deadline," the newspaper club is in a rush to report Moka and Tsukune's discovery of the identity of the person who was kidnapping girls from the school.  But Kurumu keeps wandering off, a she's being blackmailed by some Hayden Caulfield type with a camera.  Once again, we peek up her skirt.  Every female in this series is sexually objectified, even the 11-year-old, but with Kurumu it seems especially bad.

Finally, in "Wish Upon the Moon," the newspaper club faces down the school bullies who want to extort money from them for handing out newspapers.  However, this gang doesn't go down with a simple fight, and the story will continue in Volume 3.

The sexual objectification of the female characters continues to bother me, but overall this manga shows a marked improvement over its predecessor.  I do want to find out what will happen next in the story, so I'll be reading Volume 3 soon!