Tasha's Guide to Not Reading the Dark Side 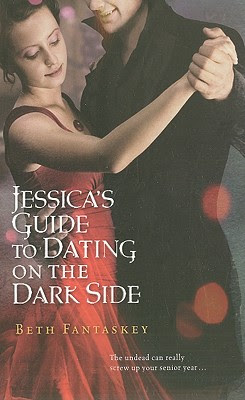 Have you ever read a book that really pissed you off just on principle?  I recently finished Jessica's Guide to Dating the Dark Side, and let me tell you--to anyone who thinks Twilight "sends the wrong message to young girls," I challenge them to read this novel and then tell me how bad they think Twilight is.

The novel itself is pretty shallow, as one can guess from the summary: "Marrying a vampire definitely doesn’t fit into Jessica Packwood’s senior year 'get-a-life' plan. But then a bizarre (and incredibly hot) new exchange student named Lucius Vladescu shows up, claiming that Jessica is a Romanian vampire princess by birth—and he’s her long-lost fiancé. Armed with newfound confidence and a copy of Growing Up Undead: A Teen Vampire’s Guide to Dating, Health, and Emotions, Jessica makes a dramatic transition from average American teenager to glam European vampire princess. But when a devious cheerleader sets her sights on
Lucius, Jess finds herself fighting to win back her wayward prince, stop a global vampire war—and save Lucius’s soul from eternal destruction."

It sounds silly but essentially harmless.  I would argue it's hardly the latter.

First, the cover:  The main character, Jessica, is a size ten.  Does the girl on the cover of this book look like a size ten to you?  As Carrie from Books And Movies pointed out, plus-sized and overweight characters are often "white-washed" off the covers of their own books.  Size ten isn't overweight by any means, but I bet it's about eight sizes larger than the model on the cover.  I found myself wondering how this connects to the book itself, where the character doesn't eat because she thinks she needs to lose some weight.  Which brings me to a second major problem with the book...

The hero, Lucius:  Putting aside how cheesy he is (which of course doesn't really bother me) and how the way he speaks can go from fresh-off-the-boat to MTV Cribs in a single sentence, the guy's an arsehole.  He judges the heroine on how she dresses and behaves, and subsequently lectures her on the correct way she should be dressing, acting, eating, etc., going so far as to actually buy her clothes for her (and was that dress really appropriate for a carnival?  Really?)  You ladies all know how attractive a lecturing male is!  Although some of his words may have been that Jess needed to accept herself, the actual message was that she needed to accept Lucius' view of herself.  Plus, he was a serious stalker.  Edward Cullen's got nothing on this guy.

Violence=Good:  Jessica's parents are tofu-eating, organic farming types who don't believe in violence.  Lucius is a vampire who solves almost every problem through violence.  The parents are repeatedly made fun of for their passive attitude toward violence.  And, when Lucius intervenes on Jessica's behalf against a bully (after her repeatedly telling him it was none of his business) by tossing him around and threatening to do more, he is painted as a hero while the "Jacob" character who did nothing is somewhat vilified for being passive.

Marriage:  I don't have anything against marriage on principle, but would any mother in America seriously encourage her 17-year-old daughter to marry a guy she only just met and move to Europe, let alone a guy as controlling as Lucius, with the words, "You'd be surprised how often disgust turns to lust"?  Uhg, are you SERIOUS????  Don't worry sweetie, you'll want to fuck him eventually no matter how much he disgusts you!  Because it's twu lurv. *GAG GAG GAG GAG*


Other than those four things, there were inconsistencies of logic, tone, and the characters were poorly drawn and thought out.  However, I don't think I would have hated this book half so much if the above issues weren't present.

This book is insanely dumb. I do not recommend anyone buy it.