To the Hilt by Dick Francis 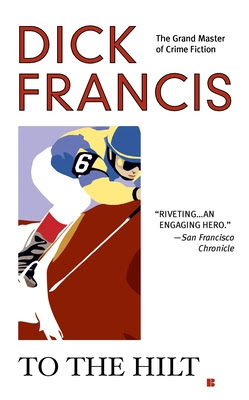 This isn't the typical book I would pick up by any means, but the lovely Orannia from Walkabout was so excited when she recommended it to me that I thought I would give a try.  And then I just happened to run across it in the $1 shelves at a used bookstore, so I figured it was kismet.  And it was!  I freaking LOVED this book, and I'm so so happy I read it.

Alexander, or Al, Kinloch lives the idyllic existence of an artist in a stone cottage (or bothy) on the side of a mountain in Scotland, with no electricity, running water, cell phones, or intrawebz.  Then his peaceful paradise is shattered when four thugs appear, toss the bothy, beat Al up, and throw his barely-conscious self down the side of a cliff.  The only clue Al has as to why the men attacked him was the question they kept asking: "Where is it?"

Since his home is pretty much destroyed, Al decides to go to London to visit his mother and ailing father-in-law.  This is where he learns that Sir Ivan has entrusted him with his two greatest treasures, one of which was probably the "it" of the thugs' questioning.  On the plus side, Al is relieved to know they weren't looking for what he thought they were.  On the downside, he now has to save Sir Ivan's business from bankruptcy, protect his father-in-law's treasures from creditors, and keep an eye out for whoever hired the thugs to beat him up.  Things only get more complicated when someone dies.

This book tells a fabulous story.  Even though it's classified as a mystery, I think it's more accurate to call it a romance--but in the Arthurian sense of the word.  Al is the knight errant, called in to fight his lords' battles for honor and treasure--swords and chalices, no less.  He is ridiculously brave and honorable and true, and the villains are equally unreasonable and devious.  Instead of jousting or going on quests, Al plays golf.

One of the more interesting aspects of this book, which works into the Arthurian romance theme, are the female characters.  Some are honorable and brave, and meant to be protected (Al's mother, for example).  Others are villainesses, witches and dragons who do not make life easy for our noble hero.  Even the honorable women are meant to be treated with caution: "Men were right to be afraid of women, I concluded," Al thinks at one point, "the witch lived near the surface in all of them."  This may sound really sexist, but I actually didn't feel like it was at all.  Yes, the women are characterized according to types you can find in an Arthurian romance--but they're not reduced to sexual objects or denigrated, and all of them have several aspects to her personality.  They are for the most part minor characters, but well-rounded minor characters.  Overall the women in this book are depicted as powerful forces for good and evil, and the equals of men.  I think the fear Al refers to isn't misogyny, but respect.

Aside from that, I loved the details in this book.  Francis definitely knows how a painter thinks:  when Al looks at something, he can see it on the canvas, and thinks about how he would create it with layers of paint and different techniques.  I loved learning about how he painted his works, and how even supposedly pedestrian subject matter was illuminating and inspiring to viewers who really took the time to look at his paintings.  I also love Al himself--I really hope, though am doubtful, there are more books with him--and how the title has multiple meanings, and how the plot thickens.  I love it when the plot thickens!

The only thing I didn't like about this book was the ending, which kind of felt like a Deus ex machina.  I would have preferred it if Al had discovered the perpetrators on his own instead of them revealing themselves.  And I was all set for there a much bigger conspiracy and evil plotting than there was, so I was left hanging there.

All that is a minor quibble, however, for what for the most part is simply a perfect book.  Thoroughly enjoyable, smart, with great characters and a well-told story.  I can't recommend it enough!

So who has recommendations for another good novel by Francis?