To Have and To Hold by Mary Johnston 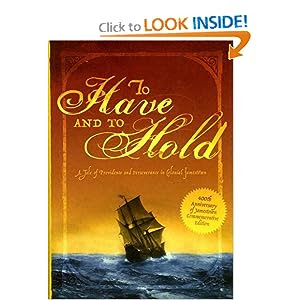 Musical Notes: I was on a Taylor Swift kick while I was reading this and thought "Love Story" made a great accompaniment.

This is a novel that has everything--sword fights! Pirates! Romance! Adventure! Runaway heiresses! Great villains! Daring escapes! Despite the vanilla title and the fact that it was written over a century ago, this book a manifesto on what an entertaining adventure novel should be.

The setting is colonial Jamestown, where Captain Ralph Percy has turned his fortunes from the sea to tobacco farming. One day Ralph decides, on the throw of a dice, that he should marry. Coincidentally, a ship has just arrived in Jamestown filled with fair young (and desperate) maids, all looking for a husband among the far more desperate male populace. Amidst the bawdy, lewd, and completely insane chaos of the women's arrival, Ralph spots one who is a unique beauty. Little does he know how unique she is, even after he realizes she traveled to Jamestown under a false identity.

It turns out Jocelyn, whom Ralph quickly marries, is actually the king's ward and betrothed to his highness' favorite, Lord Carnal. The beautiful and utterly amoral lordship quickly chases his prey down, arriving in Jamestown with a letter from the king demanding her return--and, should she be married, that her husband be put in irons and hauled off to The Tower to enjoy a long imprisonment and possible death.

The language of the book is dense--it's written by an Edwardian trying to sound like a seventeenth-century colonist--but still very readable and actually kind of delicious. That and the incredibly visual descriptions really helps to bring Jamestown to life. Add in great characters and you've got a nearly perfect novel. 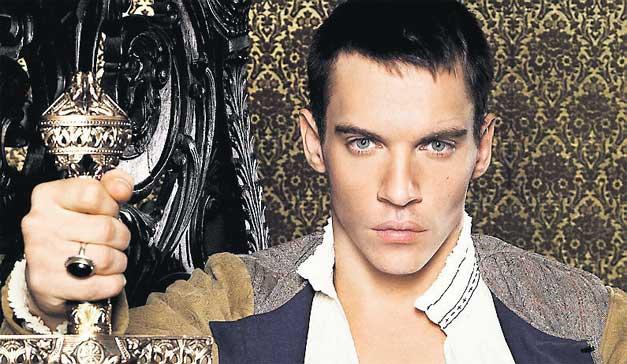 I don't usually "cast" characters in the books I read, but with this one I couldn't stop myself. Lord Carnal is so obviously Johnathan Rhys-Meyers: the beautiful bad boy. 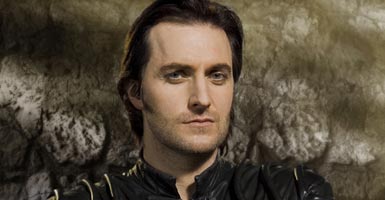 For Ralph, I've decided to cast The Armitage. Why? BECAUSE. 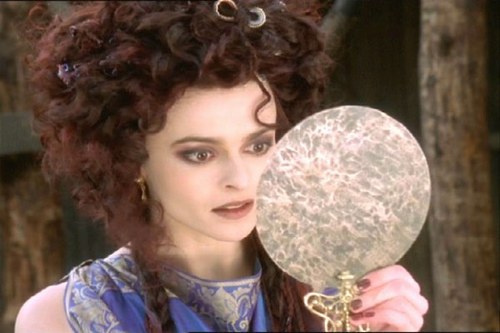 As for Jocelyn, I think she'd be charming played by a young Helena Bonham Carter. Even though Carter's roles are usually variations on Crazy Lady, she can play semi-normal people. Just look at A Room With a View (okay, maybe that's not the best example).

Of all the characters, Jocelyn is probably the weakest in terms of likability. She's definitely not a post-feminism romance heroine: she values her honor (read: virginity) above her life, is practiced at sitting around looking pretty, and is described and child-like several times. That being said, though, the woman's also got backbone. By the end of the book, I understood completely why Ralph loved her.

Overall this is a great adventure tale worthy of your time. And if I haven't done enough to convince you to pick it up, check out Melody's great review of it at Edwardian Promenade.

A Note About Indians

What would a novel about colonial Jamestown be without Indians? Not much of one, that's for sure. Going into this book, I was mainly worried about how the Indians would be portrayed from a 1900/colonial viewpoint. The fact that they would be stereotyped almost goes without question, but how and to what extent?

To tell the truth, for most of the book, the portrayal of Indians wasn't too bad. Percy hates them, of course, and thinks they're godless savages out to get him and every other Jamestown settler--but I wouldn't expect any less from a seventeenth-century European. Strangely, he also has friends among the Powhatans (the tribe that interacts most with Jamestown), namely Nantauquas, the brother of Pocahontas and brother-in-law to Ralph's besty, John Rolfe.

Then I came to the ending. The Powhatan chief, Opechancanough, decides it's time to drive the English colonists out and wages war against them. In the midst of the battle, suddenly the Powhatans go from just plain savage to noble savages, facing death bravely; and after the battle is finished, there is only one Powhatan left standing: Nantauquas.

The Jamestown citizens let Nantauquas go (Nantauquas can't die; we love Nantauquas!), but they might as well have killed him. After he leaves the fort, he becomes ghost-like, wandering around the forest like a specter, never interacting with words but only appearing in the corner of Ralph's eye. Indeed, it's as if he's been erased from existence; even Ralph doesn't say the name Nantauquas anymore, only referring to him as "the Indian." Nantauquas is quickly vanishing from memory, or at the very least importance.

So we have the two major stereotypes of American Indians in Euro-American literature and art being played out in this novel: the noble savage and the vanishing race. I can't help but wonder, though, if Johnston is more subversive of this trope than she lets on.  At one point, Opechancanough tells Ralph, "Opechancanough knows that they [English] are good and just, that they do not treat men whose color is not their own like babes, fooling them with toys, thrusting them out of their path when they grow troublesome." We know Opechancanough is being ironical, but the fact that Johnston must have known it too indicates that she at least recognized the racial tensions at the heart of these stereotypes. Which makes me wonder why she eventually capitulated to them. Did she not know what else to do with them? Did she perhaps think she was being original? (yeah right)

Whatever the reason, the treatment of Indians in To Have and To Hold was a blight on an otherwise perfect book. It definitely wasn't enough to make me dislike the book, but it was eye-roll educing. And I still feel bad for Nantauquas.