Woodland Reflections: The Art of Truman Lowe by Jo Ortel

Truman Lowe is a Winnebago artist from Wisconsin who creates simple, Zen-like sculptures that reference elements of water, air, earth, and fire. They're also deeply informed by Lowe's personal history, that of his tribe, and European art. In Woodland Reflections, Jo Ortel tries to make a monograph about Lowe and his work that looks at his art in the context of social history and modern art criticism, placing Lowe in the larger recognition of Native American literature and art as a genre in the 1970's. 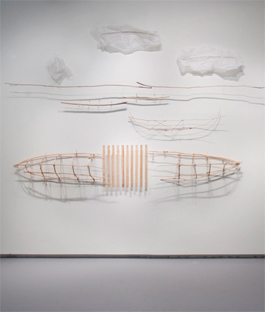 I feel torn about this book, because a part of me really loved it. I love what Ortel is trying to do and understand exactly where she's coming from. Like Linda Nochlin, she sets out to break apart the typical artist-as-hero narrative and show that Lowe's artistic "genius" is actually the result of a whole host of factors like his family, education, and the time period he was born into. I think we definitely need more books like this and don't want to discourage Ortel, or anyone, from writing another one.

I also finished it with a much greater appreciation for Lowe's art. His pieces are all about ideas, but there's a lot in them that references his personal history--art his mother made, stories his dad told him, and so forth--none of which I could have known without this book. It's interesting that Lowe identifies Michelangelo as his artistic hero, someone whose sculptures were idealized and beautiful. I can see the same interest in the ideal and beauty in Lowe's work.

That being said, the execution of this monograph is pretty wonky. Ortel focuses on subjects that don't seem terribly pertinent or important, and skips over things I wanted, and expected, to get a more in-depth discussion of. Most of the stuff she skips over is, oddly, analysis of Lowe's art! How one can have a monograph on an artist that evaluates his work in the context of contemporary art criticism without detailed analysis of his work, I don't know, but that's what seemed to be going on. We get very detailed information about Lowe's graduate school work, which wasn't terribly good or interesting; a stupid summer job he had "playing Indian" in the Wisconsin Dells during college, and a whole chapter on archaeology. I remain unclear as to why any of this was put in the book, and certainly don't know why Ortel focused on it as much as she did. There are two chapters focusing on themes in Lowe's art--the canoe and water--but these are only a few pages.

I think the main weakness of this book is that Ortel had no central narrative or theme she wanted to convey about Lowe's art. She got lost somewhere in it and couldn't distinguish what was important from what wasn't. She needed a rigid structure to get her point across, not to mention heartless editing. Overall I wound up being disappointed in Woodland Reflections--I thought it was going to be the greatest book ever, but somehow it managed to wind up being confusing. I still think it's worth looking into if you're at all interested in Truman Lowe, though.