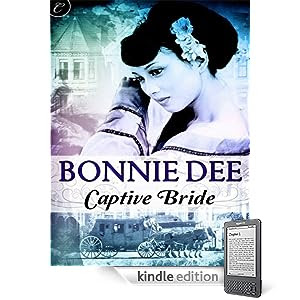 Huiann is an unmarried girl living in China, until her father agrees to marry her to a man she's never met who lives a continent and an ocean away, in San Francisco. His name is Xie Fuhua, and after a long voyage, Huiann discovers her fiance has no interest in marrying her, but plans to prostitute her out to the richest men in the city. Trapped in a terrible situation in a strange country where she doesn't speak the language, Huiann manages to escape and runs straight into the perfect person to help her--general store owner Alan Sommers. Alan is sympathetic to Huiann's plight and lets her stay in his store and work for him. As Huiann begins to learn English, she and Alan fall in love, but can their relationship survive racial prejudice and the long arm of Xie, who is still searching for his "property"? Well it wouldn't be much of a romance if it couldn't, now would it?

This is a pretty straight-forward book. There's a lot of telling and not showing, and you won't need to use your pesky brain to guess at the characters' intentions or feelings; even the villains conveniently let us know exactly what they're up to. Huiann is highly sexualized almost from the beginning--before she even steps off the boat she gets "an odd tightening in her lower belly" when she sees the sailors' "gleaming muscles." Oh, the lusty little virgin! There's also a disturbing tendency to infantilize her, with Alan remarking upon the fact that she has the body of a child but the eyes of a woman (so the best of both worlds, then, I suppose).

Alan is really a beta hero, although not a blameless one. He's partaken of Chinese prostitutes himself, and is set upon becoming a politician of all things. Gross! The political subplot really annoyed me and didn't seem to have much of a point in the story. After he and Huiann start gettin' it on, the novel focuses more on Alan's doomed-because-he's-about-to-marry-a-Chinese-woman political career, his assistant's romance with a young lady, Huiann's burgeoning dress business, and Xie's continued pursuit of her. That's a lot of stuff going on, but the narrative loses all tension because we don't see Alan and Huiann's relationship developing beyond sex anymore--more tell and not show problems. The ending goes on for way too long and the book gets kind of boring in the second half.

That being said, I did like this book. I loved the setting of 1870s San Francisco and the fact that it's almost a Western--Alan wants to be a knight a shining armor and even wears a Stetson at one point! Dee's writing style is quite gritty, even graphic at times, and it occasionally feels as if she's channeling a film noir. Xie Fuhua, for example, is described as a man who "didn't look like a beast or devil. His dark hair was shot with gray and cut short with queue. He wore a Western-style suit, and a pair of half-moon spectacles perched on the end of his small nose. A cigar burned in a dish beside him, sending up streams of blue smoke that curled around his head." Hello Hitchcock villain!

Although Huiann is sexualized and infantilized, she's not just a doll. She's a thinking, feeling woman who acts in her own interests. Alan, meanwhile, despite his sketchier moments, is a very likable character. In many ways I enjoyed this book more than Butterfly Swords, which is another historical romance featuring a noble Chinese woman and a "white" hero. Unlike in that book, here the premise and the development of the characters' relationships felt connected to the setting and their backgrounds, both culturally and experientially, and I found myself rooting for them and wanting them to get together.

Although Captive Bride does have some problems, I think overall it was worth the download. Dee definitely has the potential to be a very good writer, and I hope she publishes many more books in the future.

Thank you to the publisher for providing me with a copy via Netgalley!