DEN OF THIEVES by Julia Golding 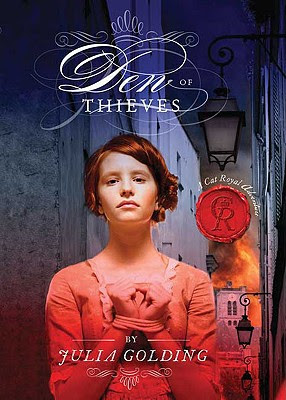 Cat Royal is getting older, and everything around her is changing. People expect her to act like a young woman now, and sexual tensions are starting to arise in some of her formally platonic friendships. Meanwhile, Mr. Sheridan has made a deal to tear down the Theater Royal in order to build a new one, which means Cat is effectively homeless. With all her friends leaving London and her world topsy-turvey, for the first time in her life Cat is finding it difficult to land on her feet. Will she be able to recover her balance in Paris?

This another great Cat Royal book. I really do feel like I want to live in these novels. In this installment, Cat loses all confidence in herself and it's heartbreaking. I think just about everyone has that period of time in their lives (maybe more than one!) when they go from being a child to a teenager, and it seems like all the things you took for granted no longer seem certain--well, that's what happens to Cat in Den of Thieves, and she doesn't even have a lot to take for granted to begin with. Luckily, she's saved by her friends (once again), and travels to Paris, where we're introduced to a whole new set of characters who rule the Parisian underworld.

One thing I was less impressed with in this book was the setting. In the previous two novels, Diamond of Drury Lane and Cat Among the Pigeons, London was so richly evoked that I felt like I was really there. With Paris... not so much. It's really too bad, because I adore Paris and this time period, but the descriptions made it seem generic. Perhaps this was due to the fact that Cat kept saying it was similar to London--really, Cat?? Somehow I seriously doubt that.

However, the blah setting was more than made up for by one of the new characters, Jean-Francois Thiland, King of the Palais Royal Vagabonds. OMG, I heart him so hard!!!! J-F, as he likes to be called, is a Peter Pan-like character who is the "king" of a gang of thieves that claim the neighborhood around the Palais Royal as their territory. And if you're thinking the Palais Royal sounds awfully similar to the Theater Royal, it's not a coincidence--J-F and Cat are similar in more ways than one. J-F is a little sketchy, but also smart and fun and totally charming, and he can dance.... I really hope he shows up in the following books.

What with Cat out of London, we don't see a ton of the usual suspects in this book, not even of the friends who also happen to be in Paris: Pedro, Frank, Lizzie, and Johnny. We certainly don't see as much of Billy Boil, Cat's arch nemesis. Now, I know I said in my review of Cat Among the Pigeons that Billy was my favorite character, but then J-F came along and I just fell in love with him! I started thinking maybe J-F had taken Billy's place as favorite. BUT. Billy shows up in the final scene and it's ahMAYzing; best final scene in a book ever! And Billy is so awesome and he really is my favoritest character again.

I love these books and these characters so much! They're so much fun and I really encourage you all to read them. If you pick up Den of Thieves, don't forget to read the opinion of "The Critics" in the front or J-F's responses to readers' letters in the back, both of which are so freakin' cute I can barely contain myself. Just another example of why I love this series.

"Ah Ça Ira" was one of the anthems of the French Revolution and appears in the book. Kind of an odd anthem for a revolution, if you ask me, but then I suppose Yankee Doodle Dandy doesn't make much sense, either.

Also, Cat appears in a ballet called La Fille Mal Gardée (loosely translated to "The Young Woman Who Needs Watching--no symbolism there, I'm sure), which was first performed in France in 1789 and is one of the oldest ballets still produced. This clip from the modern Bolshoi company is so charming I just have to include it.