Two high-society prep-schoolers murder someone just for fun, then hold a party with the corpse in the room. Will the party guests--most particularly their former professor--find them out? Or will they get away with murrrrrderrrr?

This is one of Alfred Hitchcock's lesser-known movies, but I think it's one his best. It's shot in an interesting way, is very suspenseful, and poses some interesting ideas related to nihilism and intellectualism run amok. 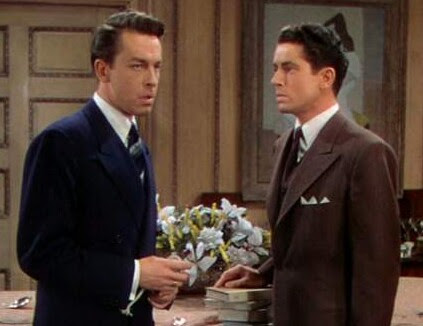 Brandon and Philip went to prep-school together and obviously developed a very close relationship. And by close I mean I kept waiting for them kiss all during the movie. They stand really, realllly near one another. Oh, and when Philip decides he wants to kill someone just so he can see if he can get away with it (not that he has much doubt), Brandon of course agrees to help.

But Philip can't just kill someone; he has to tempt fate by hosting a party immediately afterward, to which he invites his victim's parents and girlfriend, and one of his old professors. In a way he's showing off what he did to the professor, who gave him all his highfalutin' ideas about superiority. In another way it's almost like a wake, with the corpse in the room and food being served on top of his coffin. The guests talk about the victim an awful lot, not that one notices in the movie, because David--the murderee--is at the forefront of one's mind. If they talked about something else, it would be boring!

As the soirée goes on, however, the professor (played by Jimmy Stewart) begins to suspect what Philip and Brandon have done. It's like Dumbledore realizing Tom Riddle is actually Voldemort.

In all honesty, Jimmy Stewart isn't that great in this. His character is supposed to be a super-intellectual professor who believes in Nietzsche's doctrine of the "superbeing"--people who are above morals and tolerance and things like that (naturally he thinks he's one of these superbeings). Plus Stewart's supposed to have had an affair with Philip and/or Brandon. But Stewart is such an aw-shucks boyscout you don't get any of that in the movie. He does make a great detective, though. I wonder why they didn't just change it so he was a DT Philip had cultivated for his eventual murderous triumph?

I really loved how this was shot. It was done entirely in "real time," something Hitchcock had been playing with since The Lady Vanishes. He did a series of "long shots," one after another, until a reel of film ran out (this is why some shots end focuses on strange objects, like the back of a jacket). I think this really added to the tension of the movie. Also, for much of the film the chest with David's body in it is placed just on the lower edge of the screen, so that it's always in view--and always on the viewers' minds.

Did I mention this was also Hitchcock's first color film? It's a strange choice for a first color film, because all you really see is the inside of the apartment, and Hitchcock kept the color deliberately muted. But the there's a large window in the apartment that looks out on a (obviously) miniature model of New York City, and it's fabulous! The New York City of dreams. The backdrop changes as it get progressively later to reflect the setting sun and that's mainly where we get to see the spectacle of technicolor--that backdrop would never work in a black and white film.

Hitchcock called Rope a stunt, but I think it's much more than that. It's a clever movie--with some serious over-acting at the end, it's true, but for the most part it's a lot of fun to watch and I highly recommend it.