HIDE: Skin As Material and Metaphor, edited by Kathleen Ash-Milby

Hide: Skin as Material and Metaphor is an exhibition catalog for a show of the same title that was presented at the National Museum of the American Indian and curated by Kathleen Ash-Milby. The theme of the exhibition is intriguing, offering possibilities of discussion about race, seeing, and Native traditions. However, the catalog’s essays are largely superficial, leaving one with the impression that there’s not much meaning beyond what is “skin deep” in the artwork.

The catalog’s problems really start with the design. While the Brian Jungen catalog was just this side of overdesigned, Hide crosses the line, being designed to the point of utter distraction. I spent more time running my hands over the faux-suede cover with the impression of rivets, looking at the pictures, and staring at the thick, satiny paper than I did actually reading the words printed on it. I think it was the paper that really pushed the book design over the edge, but the cover was a close second. It’s like the publishing version of rococo: frivolous, pleasurable, and the type of thing for which the phrase “don’t judge a book by its cover” was coined. There are also inserts, which are a personal pet peeve of mine and have been ever since they appeared in textbooks. I hate them. As if breaking off from the main text to read footnotes isn’t bad enough, now I have to stop to read inserts? No thank you. To add insult, these inserts weren’t even vaguely interesting. It’s clear the NMAI put a lot of time and energy into this catalog design and printing; now if only the graphic design department had also written the essays, this book would be full of win. Shiny, sparkly win.

An example of the inside of the catalog.

The actual content is chock-full of introductions. There’s the director’s introduction, the introduction introduction by John Haworth, and the curator’s introduction, which is the first chapter. There’s also an introduction to the photography section of the exhibit, by Jolene Rickard.  All these introductions do what introductions do: cover the subject with broad strokes and attempt to give an overall view of what the show is about. Ash-Milby’s introduction does a fair job of this, although there are some rather sweeping statements littered throughout, and I still don’t understand why some work was included. Ash-Milby tries to contextualize the exhibition by comparing it to other shows such as Bodies Revealed (a less ethical version of Body Worlds). I’m not sure this comparison is justified or useful; in fact, I’m fairly sure it isn’t the latter. Essentially, the Bodies shows are scientific vaudeville; Hide is--or is supposed to be--about contemporary art, which hopefully goes a little deeper than Bodies turned outside-out. 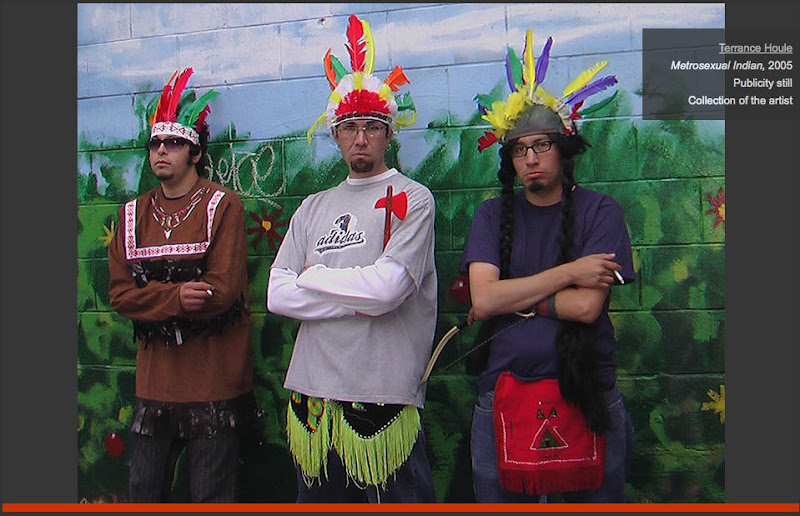 Rickard does a better job of contextualizing the exhibit, revealing that it derives from a previous show titled Only Skin Deep that was about the history of race representation. That show was all about photography, which is probably why Rickard mentioned it and Ash-Milby didn’t; still, it would have been nice to know this from the beginning. Also, one gets the impression photography was included in this exhibit only because of the show's roots, since it seems they had trouble finding photographic work that fit into the theme. I really like Terrence Houle’s photographs and do think they fit, but he feels marginalized in the catalog. Favell’s work is just boring, and I have no idea what Sara Sense has to do with the concept of Hide.

The cumulative effect of all these intros is to create a catalog that seems very shallow, and the rest of the essays don’t do very much to invalidate that impression. The only chapter I really liked in the whole book was Richard William Hill’s “After Authenticity: A Post-Mortem on the Radicalized Indian Body.” Hill takes on the issue of blood-quantum and -memory in the American Indian community, and how, though it’s defined by racist European values, has because almost self-sustaining. He also tackles the subjects of hybridity and authenticity, which are very important issues in contemporary American Indian art. Racism is a heavy subject, and perhaps Hill could have written about it a little more fully and sensitively, but I’m happy he did write about it and brought up the issue. That being said, this chapter could have just as easily been in any other catalog or book and had the same impact, possibly even more, so I'm not sure why it's included here.

Despite Hill’s essay, I didn’t like this book at all and think it has next to no value as a piece of scholarship. I don’t know what the exhibition Hide was like, never having seen it; but based on the catalog I would have to assume it was a shallow mix of great work and uninteresting work pastiched together but not really in conversation with one another. I hope next time the NMAI puts more thought into their catalog’s words and less thought into its cover.