SNOWBALL IN HELL by Josh Lanyon 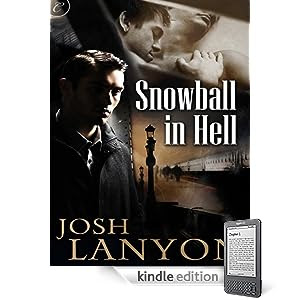 Detective Matthew Spain is a widower and former Marine in 1943 Los Angeles when he comes across the strangest murder he's ever seen: a body dumped in the La Brea Tar Pits. Fortunately, Nathan Doyle, a war reporter recently injured and relocated stateside, is on hand and immediately starts acting suspicious. It turns out he knew the victim and was possibly the last one to see him alive. Not only that, he's clearly hiding something. Is Matthew's attraction blinding him to the fact that Nathan's the killer???

This is a re-release by Lanyon in anticipation of what is apparently going to be a new series. It doesn't have the hip edginess of The Dickens with Love or the sharp wit of the Adrien English novels, all of which are set in the modern-day and told in the first person. That being said, I did really enjoy Snowball in Hell, and it's entirely due to the characters. I absolutely love Matt and Nathan, and even Matt's partner, Jonesey.

The protagonist of the story is definitely Matt, who has sort of an everyman vibe. He was married to a woman he fell in love with high school, but has always been attracted to men. This isn't something he acted on, however, until meeting the suicidal Nathan, who is obviously the "snowball" in this scenario. I'm not sure Matt could have chosen a worse boyfriend, in all honesty, and am still not entirely certain what the attraction is on Matt's part, but whatever. Even though Nathan is unstable, the story needs his manic always-on-the-edge-of-death-ness to balance Matt out.

The setting is interesting. It's not palpably 1940's Hollywood--it's not a literary version of film noir--but Lanyon does use plenty of old timey words and lingo I had to look up, and the time period and place is integral to the story line. I can definitely picture this as a black-and-white movie in my head.

The conclusion left me unsatisfied. I wanted to see Matt chew Jonesey out for dropping the ball on the investigation! I wanted Nathan to have an internal realization that yes, life is worth living. But most of all I wanted some sort of conclusion to Matt and Nathan's affair. Can these two crazy kids continue their relationship? At the novel's end, I had my doubts, but I'm more than willing to root them on.

Snowball in Hell does have problems with pacing and the mystery isn't that mysterious, but overall it was an entertaining read with characters I want to know more about. I can't wait to spend more time with Matt, Nathan, and hopefully Jonesey in the next book.