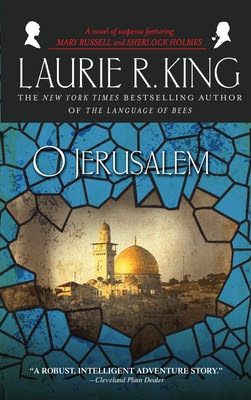 Dang, this book is long.

Mary Russell is the young partner-in-detection to the officially retired Sherlock Holmes. In the first Mary Russell "memoir," The Beekeeper's Apprentice, there is a small side note that she and Sherlock Holmes went to Palestine on a secret mission for the British government (and also to get out of the country) that's treated basically like this: "We went to Palestine for a year and it was kinda awesome and also the longest trip evar. Then we got back, yay!" O Jerusalem, the fourth book in the series, jumps back to that time period to tell us everything that went on during Russell's and Holmes' briefly-mentioned trip, to wit: they wander around Palestine for what isn't forty years but definitely feels like it; there are a lot of sheep; Sherlock Holmes gets almost-killed a bunch of times; and then they finally get to Jerusalem, where Russell starts geeking out and they stop a terrorist plot.

I can understand why Laurie R. King gave Russell's trip to Palestine its own book, because there was not way to do justice to it otherwise. As I mentioned before, this book is long. And meandery. It isn't quite that it doesn't have a plot, because it does; the reader just doesn't know what the plot is until maybe the final quarter of the book. They wander around and around with what appears to be no direction, and at some point it's like, "Just get to Jerusalem already!" Even worse, I listened to this on audio, which I really only do while cleaning or folding laundry, and thus it took me two months to finish.

I'm not going to say this book should have been shorter--mainly because I can't remember everything that went on at this point--but it does require a considerable amount of patience. It's well-researched and -written, as are all of King's novels; but I'm not a huge fan of "journey" books to begin with, and mystery books where the mystery is incidental outright annoy me most of the time, so I can't say I'm a huge fan right now.

What I did find really interesting, though, were the dynamics of Russell's and Holmes' relationship. Chronologically this is several years before they get married, before we even get a hint that their relationship is anything other than platonic. But in O Jerusalem, you definitely get the sense that the foundation of their marriage is being formed here, especially on the part of Holmes. It was more sentimental and sexual than I was expecting (not that, I'm sure, I would have interpreted it that way had I read the books in chronological rather than release order), and I think it's an awesome way to tell the story--to play with what we already know about the characters and add more layers to them that what would otherwise be there.