Book Review: SNOWBOUND WITH THE NOTORIOUS RAKE by Sarah Mallory 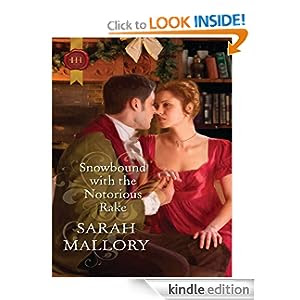 Rose, a sensible widow, is stranded in a hunting lodge over Christmas due to a blizzard. The lodge's owner, Sir Lawrence Daunton, is there all alone, drinking himself into oblivion and having a pity party. Although Sir Lawrence's rakish reputation precedes him and Rose is determined not to fall for another rogue, they decide to crank the spit and roast some chicken anyway--IF YOU KNOW WHAT I MEAN--and they fall in love. But will Sir Lawrence be able to convince Rose he's a changed man before she marries someone else?

This book is what's called a "cabin romance"--kind of like a house party romance, but with only two people. Trapped alone together in a tiny space. Who knows what could happen?! The charm of a cabin romance is that two people who would otherwise not normally socialize have to cooperate and get to know one another very well by simple necessity. Unfortunately, in Snowbound with the Notorious Rake, Rose and Lawrence are of a similar social set and I'm not sure the 'cabin' part of their romance was necessary for them to 'fall in love.'

The book started out pretty good, if extremely silly. I really liked that Rose was practical and experienced, as well as the sexual aggressor in the relationship. Once the romance moved out of the hunting lodge, however, the story lost a lot of momentum and seemed to go into a rejection repeat cycle. There are reasons for Rose to be cautious about a relationship with Sir Lawrence, but since he never behaves in any way that's remotely rakish during the entire course of the novel and is pretty obviously reformed, her repeated rejections don't seem justified.

Any connection between the two characters is indicated through tell and not show--the author tells us they feel a connection, but Rose's actions suggest rather that she believes Sir Lawrence has the moral compass of a Goldman-Sachs executive. Furthermore, it gets more and more difficult to sympathize with Rose because she's actually kind of mean; at one point she says, "I cannot imagine any sensible person asking you to stand godparent to their child." Wow, really? It's not as if he's a pedophile. Instead of telling Rose to go eff herself in a snowbank--which is what I would have done in his shoes--Sir Lawrence just brushes it off; but one has to wonder exactly how and why Rose is in love with someone of whom she has such a low opinion.

As for Sir Lawrence, he's just kinda there. He's actually actually very nice and polite and thoroughly bland. Rose's fiancee-the-second-time-around (don't most people usually break up after one of them decides they shouldn't get married?) is a total prat, yet she persists in thinking he's an upstanding citizen, which is another nail in her relatability coffin.

Overall this book is way too long, with tons of silliness that quickly descends into nonsensicalness. The characters aren't believable, and nothing very interesting happens. I will say that Rose's son, Sam, was the perfect balance between incorrigible child and convenient plot device, but beyond that I didn't find a lot to enjoy in this book.