Book Review: THE THORN AND THE BLOSSOM by Theodora Goss

Proposed alternate title: It's Not Easy Being Green 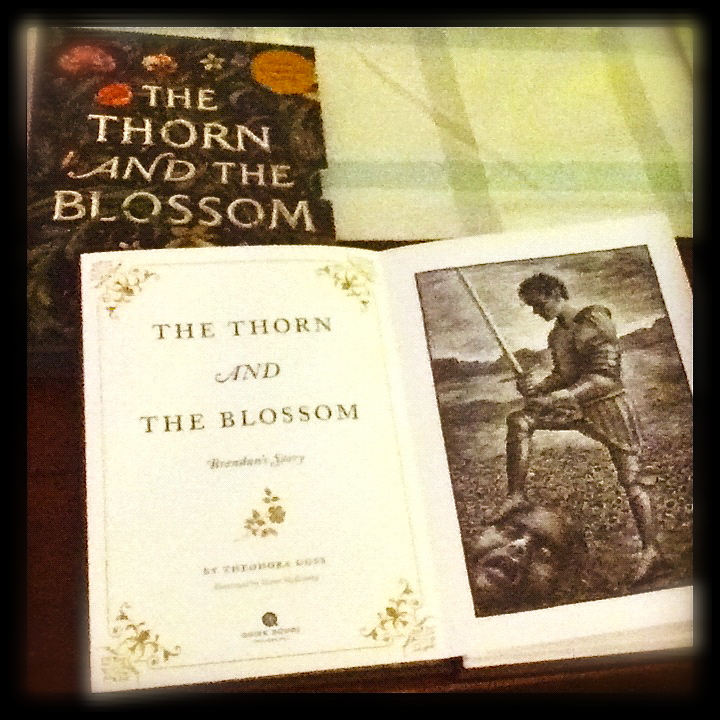 Evelyn is an American studying at Oxford, when she decides to traipse down to Cornwall for a week. While there, she wanders into a used books shop and meets the handsome son of the store's owner, Brendan (this is my dream, by the way). But will they ever be able to get together after her vacation?

This book is marketed heavily for its binding, which is in an accordion style, with Brendan's story on one side and Evelyn's on the other. Hence the subtitle of "A Two-Sided Love Story" (fun fact: one-sided love stories are also called stalking). Plus, it's nicely illustrated and designed. Although the binding is an unusual idea, I wanted to read this book because of the story, not its packaging.

The story is based on Sir Gawain and the Green Knight (or at least a Cornish version of it), which I really enjoyed. I am totally down for any book that bases itself off Arthurian romances. You see, Evelyn and Brendan are locked in a 1000-year cycle of falling in love but never being together, thanks to a giantess' curse. The cyclical nature of these star-crossed lovers' relationship is reflected in the binding of the book. Clever, eh?

I started with Evelyn's story. Unfortunately, I didn't like her character at all and I thought her story was rather pointless. There were a lot of inconsistencies between what we're told about Evelyn and how she acts that don't make her believable. She's supposed to be in her last year at Oxford, so one would assume she's spent some time in England, but she acts like she's fresh off the boat. She's supposed to be studying literature, but on a week-long vacation by herself, she doesn't bring a single book. She writes poetry and sees fairies, but is supposed to be cynical. And so on.

As for character development, I didn't get anything from her. Emotionally, it felt like her story started and stopped in the exact same place (location-wise, it did, actually--that didn't help). Oh, girl's got problems, but those problems have nothing to do with Brendan. It was like at the beginning of Beauty and the Beast, where Belle sings, "Little town, full of little people, every day like the one before." Now imagine if Belle had stayed in the town and married Gaston, and you have an idea of my frustration with Evelyn. She's stupefyingly conventional and never seems to think through her decisions.

Thankfully, Brendan's story saved this book for me. Although he seemed like kind of a prat in Evelyn's side of the book, he clearly is the hero of this story and I felt like there were challenges he had to face during the course of the book that helped him grow emotionally and wind up in a place where he could achieve his dreams. It's interesting that even in books with "two sides" to the story, and ones written by women to boot, the female is still written as such a passive character. Not that Brendan is a particularly active character, of course, but at least he made conscious decisions and used his own judgment.

Although this book didn't blow me away, there's a lot packed into its eighty pages. It's definitely not your run-of-the-mill romance, either in the binding or the way the story is told. I would definitely recommend it if you're at all interested, especially if you happen to be an Anglophile or a medievalist.