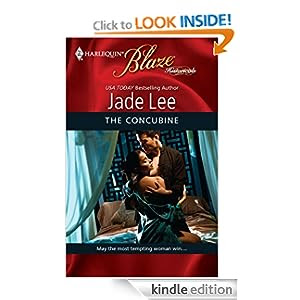 Sun Bo Tao is a notorious playboy and the Emperor's best friend. When he criticizes the Emperor's foreign policy, however, Xian Feng punishes Bo Tao by making him Master of the Festival of Fertility, wherein eligible noblewomen throughout China come to the Forbidden City to compete for the position of Empress. I know what you're thinking: a playboy surrounded by desperate virgins... how could this POSSIBLY go wrong?

I love Jade Lee's Tigress series, which also takes place in Imperial China (although during a different time period), and this novel has all the elements from those books that I like: well-drawn characters, an awesome setting, and a wonderful story. It starts off with a great meet-cute between Bo Tao and Ji Yue, one of the Imperial Virgins, and is pretty much unputdownable from then on. There's never a lull in the narrative, and every character gets as much time on the page as they warrant. Ji Yue and Bo Tao go from hating one another's guts to pulling each other's clothes off perhaps a little too abruptly, but I think that can largely be attributed to the length of the book. And they definitely have chemistry, so it's not unbelievable even if it does seem a bit rushed.

Jade Lee really has a gift for writing historical romances set in China: they feel exotic, but at the same time there's always something familiar from a Western perspective to make the characters relatable, despite the cultural and historical gulf. It wouldn't be unreasonable to say this novel is like The Bachelor, but set in Imperial China; except that for Ji Yue and the other virgins the stakes are much higher than being sent home 'broken-hearted.' They can't go home if they fail the tests--that would shame their families. Their only options are to remain in the Emperor's harems forever, become prostitutes in Peking, or kill themselves. Those are pretty high stakes for a woman to face and still pursue another relationship! Ji Yue might have come off as an idiot for choosing Bo Tao over all that, but she doesn't because the choices she make are for herself.

The romance between Bo Tao and Ji Yue also draws upon the European literary device of courtly love (that Meghan mentioned in her guest post on medieval romance), in that there's nothing but shame and death that can come from their relationship. This is a modern-day romance novel, though, so thankfully things work out.

As for the exoticism, I don't think it comes so much from the setting as what Lee does with it. Imagining characters and stories set in China seems to give her the freedom to be much more creative and unconventional with how she builds her characters and plot than she is with romances set in prototypical nineteenth-century London, like The Devil's Bargain. She really has never failed to surprise and entertain me with either the Tigress series, The Dragon Earl, or this book; which is a shame, because as far as I can tell, Lee has no more novels set in China in the works.

To say I'm super-disappointed over this--and how other writers who set romances in unusual time periods and places are often either dropped or redirected to more popular settings by publishers--would be an understatement. I know they probably claim that readers don't seem interested in different settings as some bullshit excuse, but let me tell you something, publishers of historical romances: I AM YOUR AUDIENCE. I am the proverbial choir to your preacher; I am going to smell what the Rock is cooking. But to be honest, the whole Regency romance thing was getting a little tired in the late '90s. So trust me, I'm interested. I will take any unusual setting you have to offer: China, India, Canada, even nineteenth-century Paris, but PLEASE allow a book set somewhere other than nineteenth-century London to be published on a regular basis. Please! /public service announcement

If, like me, you enjoy historical romances but are looking for something a little different, I highly recommend any of Jade Lee's books. The Concubine I think is one of her more accessible novels, and probably your best bet if the prospect of reading--in detail--about Taoist sex cult practices makes you a little nervous. There's no sex-as-a-spiritual-practice in The Concubine as there is in the Tigress books; it's just a delightful romance novel set in the Forbidden City with top-notch research and great storytelling. Definitely a keeper!

Musical Notes: "All I Ever Wanted" by Airborne Toxic Event