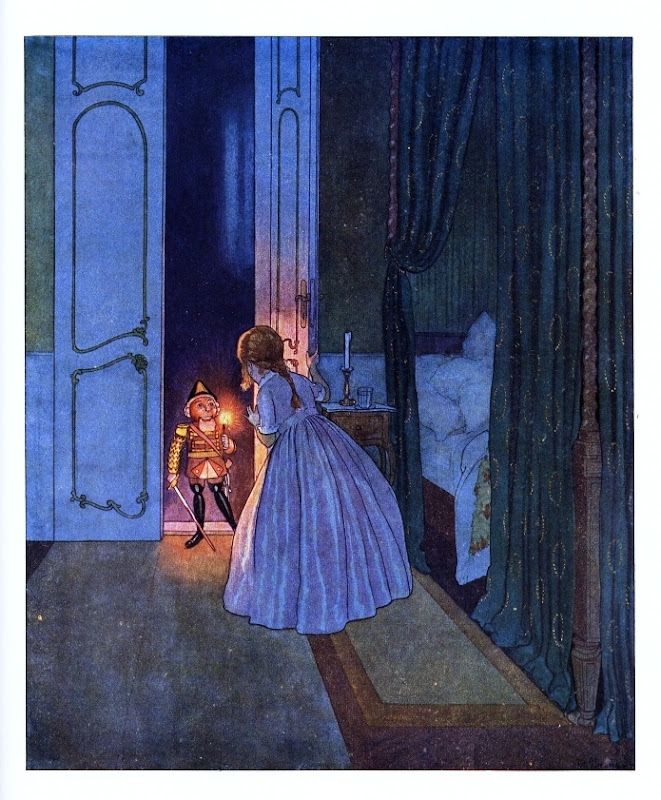 "She tossed her little coat on and flung open the door. Little Nutcracker was standing outside, with his bloody sword in his right hand and a wax candle in his left hand." Illustrations by Artus Scheiner, 1924.

It's not Christmas without The Nutcracker Ballet, which my mom makes me watch every year (the Mikhail Baryshnikov version). Although I do enjoy it now, when I was a kid I thought it was a little boring. For one, why is that girl all into a nutcracker? If I'd gotten that for a present at seven years old, I'd have been like, "What am I cracking again?" For another, once the nutcracker turns into a prince and things FINALLY start to get interesting, there's just a bunch of nonsensical dancing by people who are NOT the prince and princess for an hour and half. Plus, it has the type of ending I hate, where the girl wakes from the dream and says, "It was so real! And you were there, and you were there..." GAH.

I could say the ballet all makes sense these days, but honestly I feel the exact same way. I appreciate dancing and costumes more than I did when I was a kid, but my opinion of the plot is still pretty much what it was when I was seven. The Nutcracker is something that sounds great on paper--something that I always thought would make an awesome story--but in the end the ballet's never really about the story, so I'm disappointed.

I'd been under the impression for years that The Nutcracker was something Tchaikovsky had made-up; so imagine my surprise (and excitement) a few weeks ago when I learned that the ballet's actually based on a book! By famed Gothic writer ETA Hoffmann, written in 1816. I had never heard this before--or if I had, it didn't sink in--but naturally I immediately had to check it out and compare the two. I love it when the things I think will make a good book are actually books! 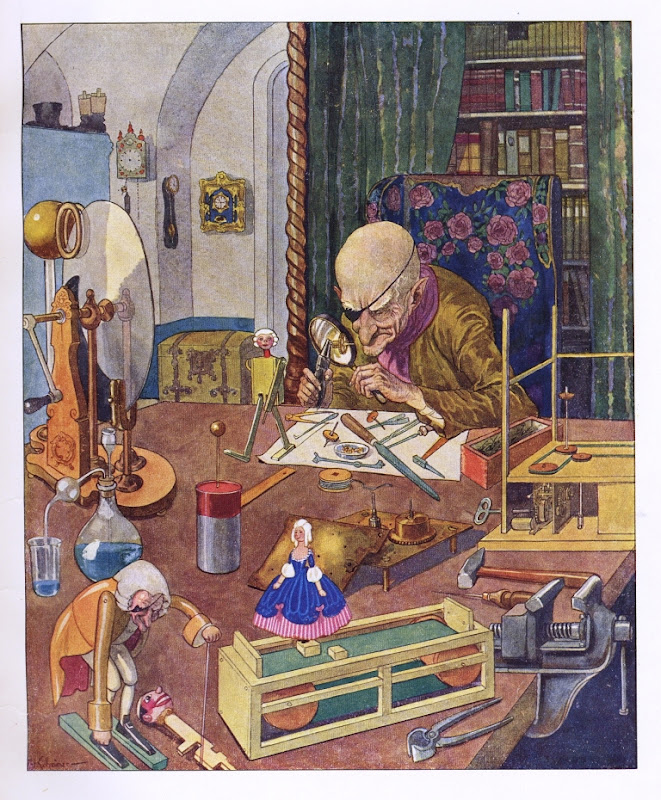 "Indeed, the godfather was altogether a very artistic man, who even knew a thing or two about clocks..."

Tchaikovsky's ballet is actually pretty similar to Hoffmann's original story, although a simplified version (I have to say, he did an excellent job of adapting it). It's about a little girl who gets a nutcracker for Christmas, saves him from an evil mouse king, and travels with him to another land where everything is made of candy, including his marzipan castle. But Nutcracker and Mouse King is a more cleverly told story, less linear and less fantastical than the ballet. In tone it's closer to the magical realism of something like Pan's Labyrinth--the magic isn't confined to dreams, it exists in the waking world and can bite you pretty damn hard in the ass.

What makes the book creepy are two things: first of all, no one believes Marie about the Mouse King. She's on her own trying to protect herself and the nutcracker. Second of all, there's Pate Drosselmeier, who is a benevolent character in the ballet, but not so much in the book. It's not that he's necessarily bad, or good, but that no one knows WHAT he is. He makes mechanical toys for the kids, but they're so delicate and sophisticated the children can't really play with them (and don't really want to). He mocks Marie one second and tells her stories about the nutcracker the next. He's not entirely trustworthy, which is terrifying because he seems very powerful. 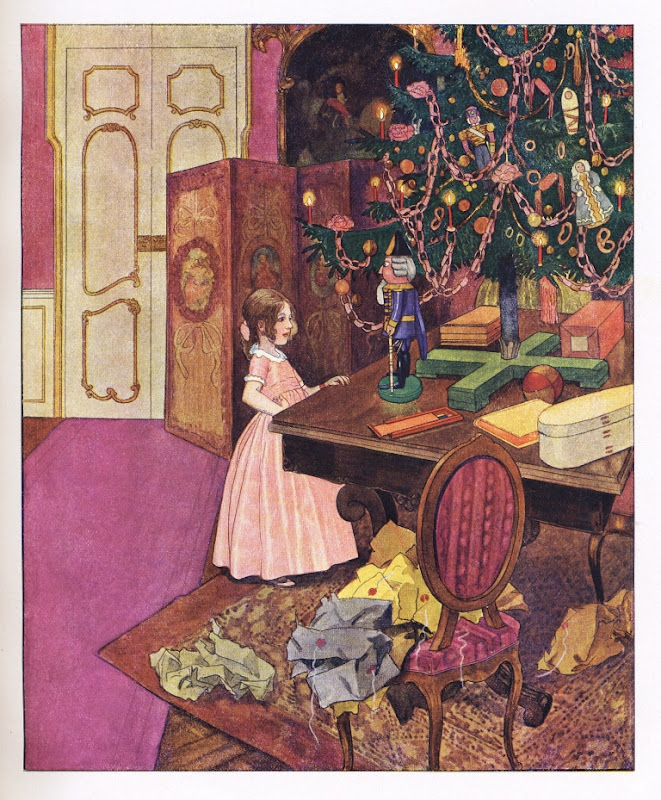 "Actually, Marie didn't want to leave the Christmas table, for she had discovered something that no one else had as yet noticed."

The scary factor didn't have too much of an impact on me as an adult reader, but what I did really like about the book version much more than the ballet is that Marie's interest in the nutcracker here seems logical: he's not a Christmas present, just something she notices and gloms onto in the weird way kids have. Her dad tells her specifically he's not her present, but it becomes clear fairly quickly that she's adopted him anyway. Once the nutcracker starts coming to life, he shows a great deal of personality, has sparkling eyes, fighting skillz, and a romantic streak. Who wouldn't like the little guy?

The other thing that really fascinated me in this novel was, weirdly, the glass cabinet. The glass cabinet has all of Herr Drosselmeier's "presents" to the kids on the top shelf, and Marie's and Fritz's toys on the two bottom shelves, and it's where the nutcracker lives. I loved this because, one, the German propensity to collect knickknacks and then put them into cabinets never ceases to amaze me. You should see my grandparents' house, for realz. And two, this reminded me that as a little kid I was totes obsessed with all the things that were in my mom's and grandparents' glass cabinets. I wasn't allowed to touch any of them, which was guaranteed to make me wonder WHY and really want to look at them. The glass cabinets seemed like chests of tiny treasures, full of mystery and possibility, which was the perfect tone to strike in this story.

Finally, I really liked that Hoffmann's tale had a happy ending. In the ballet, it's all a dream, and Marie has to resign herself to a normal life after living in a fairy tale castle, which is a total bummer. But in Nutcracker and Mouse King, it's all real--and like Ofelia in Pan's Labyrinth, at the end she gets to return to the fairy tale castle with her prince. 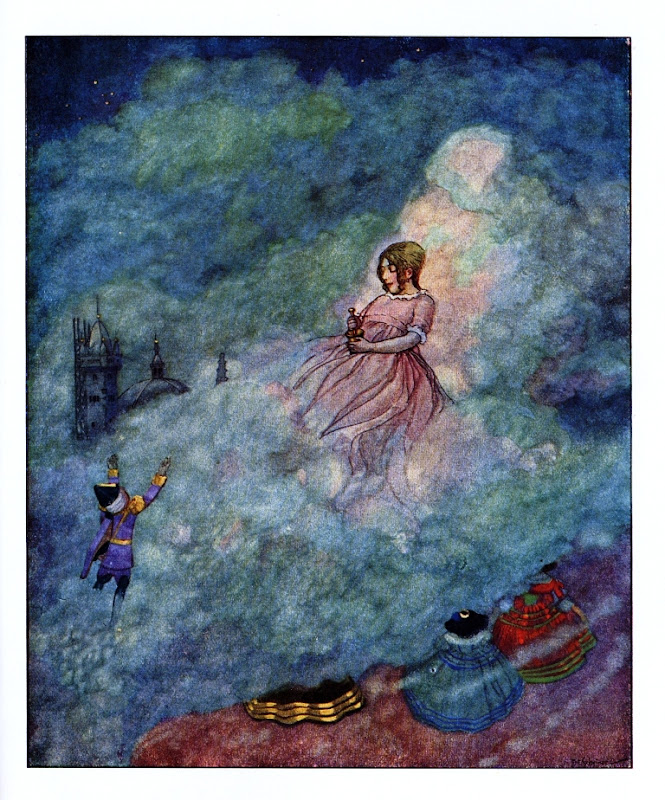 "Soon, rising like clouds of mist, Marie watched the silvery gauzes, in which the princesses, the pageboys, and Nutcracker swam."

This is definitely a story written to be read aloud to kids, and perfectly evokes the magic of Christmas from a child's perspective. There's not a much of a line between fantasy and reality, and Hoffmann makes no effort to draw one. The translation in my version was a little hinky (not that I have any of Hoffmann's other work to compare it to, whether German or English; but I'm going to go out on a limb and say he at least knew how to use pronouns correctly), but it was still a delight to read and reminded me what it was like to be a kid on Christmas Eve, which is awesome. I definitely recommend this book for kids of all ages!

This post is part of the 2011 Virtual Advent Tour. Check out the website for more postings.
at 12:08 AM