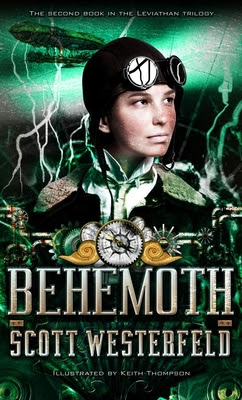 Despite my problems with Leviathan (review here), I still felt compelled to go to my library and immediately pick up Behemoth and Goliath. What can I say, I really wanted to know how Alek and Deryn's relationship was going to shake out. So basically I read this entire series in under a month, which for me is quite a glomfest.

If you don't know what the Leviathan series is about, it takes place in an alternate WWI, where the Axis powers' technology is machine-based and the Allies use genetically modified animals for their technology. In Behemoth, Alek, a runaway Austrian prince, and Deryn, a girl serving in the British Air Service, are on board the Darwinist airship Leviathan and headed for Constantinople. Alek needs to escape both the Darwinists and the Germans, but Istanbul is under German control, and both he and the Leviathan are in danger. How will they escape? And will Deryn EVER tell Alek she's a girl?

Shortly after starting Behemoth, I had a revelation: this series is kind of like a steampunk version of Battlestar Galactica! Alek is Apollo, Deryn is Starbuck, Count Volger is Adama, and Dr. Barlow is... Six? Okay, maybe it's not really that much like BSG, but in both cases the only thing I care about is the romance between the two main characters. And as long as Deryn and Alek were together, Behemoth was much more interesting than Leviathan. I loved the interactions between Alek and Deryn, and the scene where Alek confesses he loves the Leviathan may be one of my favorite YA scenes ever.

Another thing that made Behemoth more interesting to me than Leviathan was that there were more women in it! Yay Team Vagina! There were two new female characters: a young woman named Lilit, and her grandmother, Nene. Nene is in charge of a group of Istanbul revolutionaries, and Lilit pilots a walker, fights in her family's revolutionary army, and publishes pamphlets about women's rights. There was definitely some subversion of gender stereotypes in this book--at least as far as the stereotypes the characters have, including Alek, who can't believe a girl would be capable of fighting or piloting a walker.

Even beyond that, though, women are just more visible in the street scenes and society of Istanbul than they were in Germany or England. I feel like the setting itself is more feminized than that of Western Europe and that's at least part of the reason. Both Germany and Britain are attempting to court Istanbul, whose Sultan behaves with remarkable passivity. Even the Istanbul technology, a mix of Darwinist aesthetics and Clanker mechanics, seems like a compromising, gentle version of the two extremes.

Although there were scenes that went on a little too long, and the story definitely lagged in the middle while Deryn and Alek were separated, for the most part I think Behemoth is the best book in the entire series. There's tons of action, and the world building Scott Westerfeld set up in Leviathan starts to really pay off. 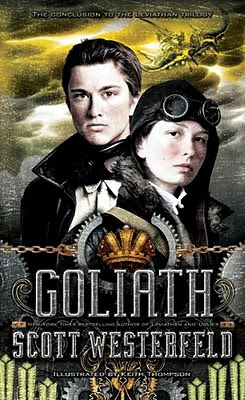 In Goliath, Alek and Deryn are headed to Japan on board the Leviathan when a message from the kaiser of Russia (the book's terminology, not mine) reaches them asking for help in a rescue mission. The man they pick up, Nikola Tesla, claims his weapon of mass destruction, the Goliath, will stop WWI. Shades of the atomic bomb! Naturally the British want their hands on this weapon, and soon the Leviathan is sailing over America on its way to London, where the only action the characters are in danger of facing is that which is shouted by a director from behind the lens of a motion picture camera.

Honestly, I was a little disappointed in Goliath. This book is different from the previous two in that the Leviathan is largely removed from the European theater and instead spends at least half the novel in America. Tesla wants to use Alek's notoriety as the lost Hapsburg prince to generate publicity and investors for the Goliath, and as a result the only challenges Alek seems to face have to do with newspaper reporters and cameras.

The fact that I just used the words publicity and investors in the same sentence should tell you all you need to know about this book.

As for Deryn, she wasn't given a lot to do in Goliath. She loses a lot of her swagger and literally spends a good portion of the book in her room, whining over how everyone is going to find out she's Team Vagina. I also felt like her autonomy was undermined in this novel--subtly, but it's still there, especially in the use of cameras. The camera has often been connected to the "male gaze," and when Alek first encounters them he's very uncomfortable about being exposed. Yet soon he's watching--along with a bunch of other men--a woman on the screen in Perils of Pauline, and when Deryn is captured on film it presages the fact that she's about to be exposed as a female.

As far as the threat of Tesla's superweapon was concerned, I thought was a little lame. I was never entirely sure how the Goliath worked, what it was supposed to do, or why I should care. It was quite snooze-worthy, and I couldn't help but wish the Leviathan had headed west instead of east.

I do still love the world of this series as a whole, and a part of me even wishes there were more books about the Leviathan to read, but I think the highpoint of the series was definitely Behemoth.