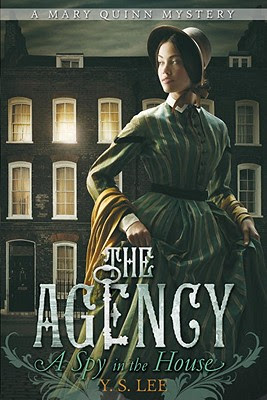 Mary Quinn is a young woman with an uncertain future. An orphan, she grew up in Miss Scrimshaw's Academy for Girls; but now at the end of her education, she's not sure what she should do. When she turns to the Academy's headmistresses for career advice, they reveal that the Academy is actually a somewhat creepy training ground from which they cull new recruits for their secret organization of all-female investigators! Mary jumps right in and is soon posing as the paid companion of a completely dreadful brat in the home of a merchant, trying to find hidden Indian* treasure.

I really enjoyed the first part of A Spy In the House, which Anachronist from Books as Portable Pieces of Thought was kind of enough to send me. The Academy had a fun Men In Black feel to it--except they're women--and I'm a sucker for plots revolving around stolen pieces of art. But once Mary goes to the Thorolds' house, things started to unravel.

First of all, the person who's the big baddie--if you can call them that--is obvious from the beginning. All of Mary's investigations are simply an excuse for her to be rescued by James, the love interest who is a completely unappealing and unpleasant jerk, as is every other single character in this book. What makes it even worse is that Mary excuses all their behavior toward her.

The point at which A Spy In the House lost me, however, was the "plot twist" in the middle where it's revealed Mary is not entirely Irish. Race should never be used as a plot twist. That is my personal opinion. Don't get me wrong, I have no problem with the fact that Mary is not white, or that it was necessarily revealed in the middle of the book. More that it was played with a tone of, "Surpriiiiise, the main character isn't white! Doesn't that change your assumptions about her?" Um, not really, and I don't quite understand why it would, from a contemporary OR historic perspective. Didn't 19th century English people consider the Irish not-white and the lowest of the low anyway?

The rest of book was okay. There was a lot of infodumping, unbelievable coincidences, and awkward scenes, but what really got to me was that I disliked every single one of these characters, especially James. What an arse. I'd like to read more about The Agency, which I think is a great concept, but I'm not sure I want to spend more time with Mary Quinn. I take it the other books still focus on her character?

*The sub-continent, not the American Indians.
at 12:37 AM