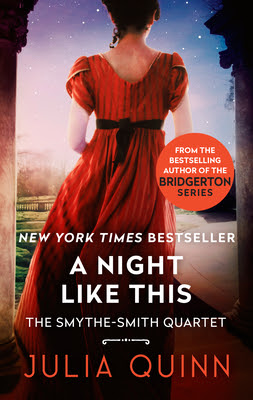 Anne Wynter-with-a-Y is a governess to some Smythe-Smiths, and is roped into playing the piano at one of their infamous musicales. Daniel Smythe-Smith, the Earl of Winstead, recently returned from abroad, sees her from across the room and decides he HAS to have her. So he chases her down after the musicale, sticks his tongue down her throat, and voilá! Anne and Daniel are in love. But since they're both on the run from nefarious no-good-doers, will these two crazy kids ever get together?

Before I start this review, I should probably mention that I have a habit of being indifferent about the Julia Quinn novels everyone else seems to love, and really liking the Quinn novels other people hate. Notice I said indifferent and like, not love and hate--her fluffy romance has always been a little too fluffy for my tastes; but she does write charming historical romance really well. Or she used to--I hadn't read any of her novels since Mr. Cavendish, I Presume; but a few of my favorite bloggers assured me that A Night Like This was enjoyable, so I was interested in checking it out.

I didn't hate A Night Like This, but I had some problems with it. First and foremost, there was no chemistry between Daniel and Anne at all. The only things they seemed to see in each other were 1. physical attraction--Daniel likes Anne because she's pretty; and 2. on Anne's part, Daniel's an earl and rich. Actually I have no idea what Anne felt about Daniel because Quinn never bothers to explain or demonstrate Anne's feelings on the subject until page 306 when she declares she loves him. He sexually accosts her in a hallway before they're even introduced and her reaction is, "Eh." And this woman's life was supposed to have been destroyed by a man who took advantage of her? Seems like an unrealistically mild response on Anna's part. Daniel then proceeds to be a total creeper and forces her to live under his roof, which should at the very least annoy her. Or maybe she could be like, "Hooray, I can finally get my claws into that rich bloke and quit teaching these brats!" But no. No reaction at all. Like, hellooooooo? *knock knock* Anyone in there? She could seriously be a talking sex doll and evince as much personality.

I also had a problem with the Smythe-Smiths. They were gimmicky joke that was starting to get old in the Bridgerton series (the family with two last names that's tone deaf but insists on holding yearly musicales, laff laff), and now they have a whole series all to themselves? Scraping the bottom of the barrel, are we? I wouldn't mind so much if they had ANYTHING else going on other than the fact that they're terrible at music, but they don't. Seriously, that is THE ONLY THING going on with this family, and there are four incredibly long conversations in this novel about how the whole family is bad at musical instruments. We get it already!

I did enjoy parts of A Night Like This--the parts that had nothing to do with the romance. I especially liked the chapter where Anne's charges put on a very imaginative play titled "The Strange, Sad Tragedy of Lord Finstead," and made Daniel play the lead role. That play sounded really fun and interesting, and I wish A Night Like This had half of that imagination. Alas, it really felt phoned in, and the parts that were fun to read weren't enough to make up for the complete suspension of disbelief required to swallow the plot, or the lack of romantic tension.

Thank you to TLC Booktours and the publishers for sending me this book to review!
at 1:28 AM