Review: CONFESSIONS FROM AN ARRANGED MARRIAGE by Miranda Neville 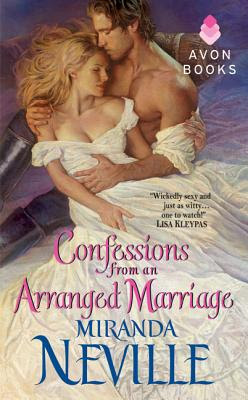 <--I think this model has the same tan line I do! She needs to use sunscreen.

Minerva and Lord Blakeney are meant to be together. It's obvious because, in The Amorous Education of Celia Seaton (review here), they fought all the time. But they themselves do not know this--if they did, Confessions from an Arranged Marriage would be a very short book. Blake wants to spend his time drinking and hanging out with his mistress; Minerva wants to change the world through a politically powerful husband. Unfortunately, Blake accidentally ravishes her during a ball and then they have to get married. Whomp-whomp. Now they have to make the best of things, which shouldn't be too hard since they're both really good-looking.

After enjoying The Amorous Education of Celia Seaton, I had really high expectations for Confessions from an Arranged Marriage (it's not really an arranged marriage, by the way, it's a marriage of convenience, so a much more accurate title would be Confessions from a Convenient Marriage). Unfortunately, I never felt any chemistry between Blake and Minerva, which really limited my enjoyment of the book, even though it does have redeeming qualities.

With a hero named Blakeney, I would have been disappointed if Miranda Nevillle didn't reference The Scarlet Pimpernel in some way, and fortunately she does: Blake and Miranda don't really trust one another, go to Paris, and do a little spying (although that's not a major element in the plot of the book). Also like The Scarlet Pimpernel, Blake has a secret which results in him being a major asshole to his wife. The difference is, with Confessions from an Arranged Marriage, I knew what that secret was, and it did not help Blake's case. I never thought he was an idiot, even in The Amorous Education of Celia Seaton; but I did think he whined a lot, behaved selfishly, and was the exact opposite of hero material for most of the book--take, for instance, the rumors of him being a bully in school, which were a big concern for me. I found myself wishing I didn't know any of Blake's secrets so I'd have something to wonder about him; then at least he'd have the benefit of being a mysterious asshole.

I would have actually been okay with Blake and his anti-hero ways, though, if there had been chemistry between him and Minerva, but there wasn't. While they were on their honeymoon I found myself hoping Minerva's REAL true love would show up and sweep her off her feet. They'd reached the I'm-bored-with-you stage of their relationship and their relationship had just started!

To solve this problem and make Minerva and Blake get on with the sexytimes, Neville has to make her characters act inconsistently. There is clearly no other way this is going to happen. So intellectual Minerva, who seems like the last person to let her body rule her head, is suddenly a ball of hormones and just can't help herself around Blake because he's SO ATTRACTIVE. Keep in mind they've known each other since childhood and have never found one another the least attractive before now. Is this Stockholm Syndrome or what?

To be fair, there is a lot to recommend Confessions from an Arranged Marriage. It's not recycled or boring, and like The Amorous Education of Celia Seaton, it's based on solid historical research and is not fluffy or idiotic. It also doesn't take place entirely in London, which I loved, and the characters are well-drawn. Blake and Minerva finally start to form an emotional connection in the last quarter of the book. I think the beginning just put me off, as marriage of convenience stories aren't my thing to begin with (I'm always like, "Do you guys REALLY have to get married? Answer: no."), and not once did the characters quote poetry. Honestly, I found their affair kind of sordid and the when, how, and why of Minerva and Blake getting together was too convenient for me to forgive Blake for being a jerk.

Confessions from an Arranged Marriage is an okay book, and I know other people have really enjoyed it, but personally I wanted a bit more from it, both romance- and plot-wise.