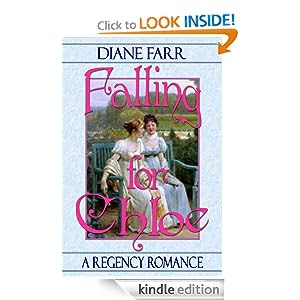 Chloe and Gil have known each other forever, but while Gil is having fun in London, Chloe has to take care of her estates in the country. Then Gil's managing mama arranges for Chloe to have a season, and while she discovers the temptations of city life and starts falling for the handsome Lord Rival, Gil starts falling for her.

Falling for Chloe is a cute and charming Regency novel. I really enjoyed the beginning, which reminded me of Here Comes the Sun! by Emilie Loring. Both Chloe and Gil are fun characters, and Gil's nickname (Silly Gilly) is arguably one of the most adorable hero nicknames ever in a romance novel.

That being said, no matter how much I enjoyed Chloe and Gil, the real star of the novel is Lord Rival, a fortune hunter who's like a tractor beam for vaginas. He's like if Ryan Gosling somehow managed to wear his abs on his face. As Gil's friend puts it, "He's devilish attractive to females." I suspect this is more because of proximity than anything else (80% of success is showing up, guys), but it's clear the main point of Falling for Chloe is to introduce Lord Rival as a character, not to show us Gil and Chloe falling in love.

I say that because they spend hardly any time together! Gil lives for years in London without giving Chloe a second thought; and once she is there, he only shows up when she demands his presence, and then he's usually hours- or days-late. Under the Making An Effort column, Gil's score is zero. I had to laugh when Gil said, "I hope you're not tired of spending time with me," because he's only around for a few minutes at a time! How could Chloe be tired of him already? As for Chloe, she seems indifferent to his presence.

And although I did like Chloe and Gil, they were pretty shallow. Chloe has to force herself to dancing with Gil's friend, whom she considers ugly, and when he courts her both she and Gil assume this is a negative reflection on her own appearance--because how can an attractive person possibly pair up with an unattractive person? Poor Jack Crawley! Too bad he doesn't know about the haterade his best friend's drinking.

Aside from that, though, Falling for Chloe is a very well-written novel. I'm not sure I would call it a "romance," necessarily, but it's worth a read if you enjoy Regencies.