Georges is a poor young hoofer in 1890s Paris looking to make his mark. After meeting an old army buddy, he gets involved with a group of snooty bourgeoisie and a bunch of women who all want to hit that. His male colleagues hate him and treat him like a pussy, but that's probably because he keeps sleeping with their wives. Don't worry, though, Georges isn't just a hot piece of ass--he has a ridiculously complex Plan to get money so that he never has to watch cockroaches crawl around his apartment again.

I first heard about Bel Ami from Anachronist at Books as Portable Pieces of Thought, and it sounded so incredibly stupid that I seriously HAD to watch it. Bel Ami actually wasn't THAT bad, though (I probably would have enjoyed it more if it was), despite the fact that it contained some of the most awkward sex scenes I've ever seen. The cinematography and set design was gorgeous, and the movie did have some semblance of a plot (even if it didn't seem like it did for at least the first hour). I also thought the gender roles in the film were pretty interesting. As for Robert Pattinson... eh. 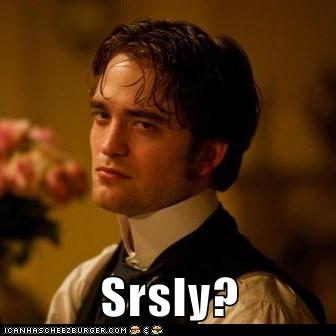 I mean, it's RPatt, so he basically spends forty percent of the movie staring and another forty smirking, which is pretty annoying. But he did make Georges sympathetic. I was honestly kind of rooting for the guy, but I'm not sure I was supposed to be. RPatt has said that Georges is amoral, but that doesn't really come across, especially in comparison to the other characters. He seems more of a bumbling idiot than a master manipulator, and he does care what at least one person thinks of him--his true love, Clothilde. I'm not sure if this is a failure on the screenwriter's part or RPatt's, but if you want someone who embodies a sexually objectified male, he does fit the bill.

Anyway, gender issues! Bel Ami reflects the fin-de-siècle paranoia about degeneration and indolence. Men should Do Things On Their Own and Not Rely On Women and all that good stuff. Except Georges basically gets everything from women, and has no intention of doing any work himself. His dad did that and it was for the birds! He'd rather make money on his back (to be fair, it's probably the only thing he's good at, and he is pretty). Georges basically takes on the role of a woman sleeping her way up to the top (à la Nana--post here--or Camille), but he's a dude. And it does get super-awkward sometimes. 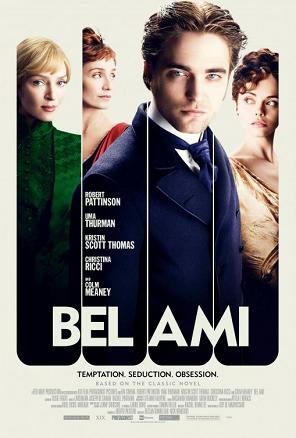 Meanwhile, there are a lot of strong female characters in this film, most especially Uma Thurman, who plays Georges' wife, Madeleine. She smokes, drinks, plots to manipulate political elections through the press, and has no intention of letting anyone besides herself wear the pants in their marriage (side note: all the female leads in this movie should send thank-you notes to the cinematographer and director, because they looked freaking gorgeous). Wow, so many awkward sex scenes between those two. Even the other women Georges hooks up with come on to him first. Does Bel Ami pass the Bechdel Test? No way. But it does show women as independent, intelligent, and powerful. I would like to say this is interpreted as a positive, but instead it's more of a sign that civilization is going to the dogs--or at the very least, people like Georges.

When it came to the twisty, Les Liaisons Dangereuses-type plot, however, I thought the film really faltered. We get only the vaguest sense of what's happening at the newspaper Georges work at, or the political and financial manipulations Madeleine is a part of; and frankly Georges' plan to get the better of everyone makes no sense. Does it really take that much effort to infatuate a teenager? There are also a bunch of things left unexplained or that seemed kind of pointless.

Even with the interesting gender role reversals, I would say unless you have a particular love for Maupassant or the setting (which I do), you can skip Bel Ami. It's only minimally entertaining and kind of leaves a bad taste in one's mouth.