Once upon a time, there was a princess named Charlotte who lived at the top of a skyscraper hotel overlooking the city of Tokyo. Although the princess could leave her tower, she always felt isolated from everyone else, until an unlikely knight errant named Bob Harris crossed her path. He brought her down from the tower and helped her feel like a part of the world again. 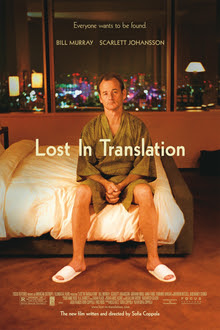 The summary of Lost In Translation (not the one I just gave, the official one), always put me off. So basically it's movie about a pair of rich people who are bored and kind of get together but not really? FASCINATING. Not. Plus it stars Scarlet Johansson, who really annoys me (the only movie I can stand her in is Midnight in Paris because she's supposed to be annoying). But then Bridget at Books as Portable Pieces of Thought assured me it was a good movie, and that there was an awkward sex scene (yay?), so I figured I would give it a try, hate it, and then cleanse my mind with something else.

What actually happened was that I didn't hate Lost In Translation--I LOVED it! I think what Sofia Coppola was trying to do with this film was capture experiences. When you're living in a different country, you don't just miss your friends and family, you miss your entire culture. Things that you take for granted suddenly become problematic. What do you do for entertainment or to unwind at the end of the day? What if you get sick and need to see a doctor? How do you order from a menu when you don't read a language? Even the things from your own home are tweaked to local tastes so that they come out not quite right. Coppola did a brilliant job of showing us these experiences in the movie: the New York Bar with the cheesy lounge singer, Charlotte and Bob ordering at a restaurant, or going to the hospital.

But whether you hate or love the culture of the country you live in, you have to adapt to it. You have to listen to the music, eat the food, and learn to communicate with people in order to survive. After a while, although you're not truly a part of the culture you're living in, you're not a part of the country you're from, either. Your "home" might even start to feel like the foreign country. I think that was the point of the painful phone conversations Bob and Charlotte had with the people they love back in the US. I also think the Tokyo street scenes did a great job of conveying that feeling of being in limbo--physically being somewhere, but not really a part of it. 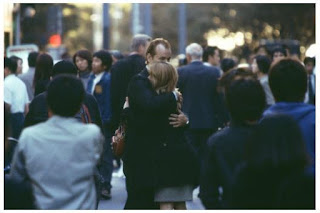 It's interesting to compare this movie to Marie Antoinette, also directed by Coppola. They're both about poor little rich girls who aren't sure how their world works or what their place is in it. I think Lost In Translation is more hopeful, though, because first of all it's really funny. I laughed my patootie off during the awkward sex scene, and all the cocktail lounge scenes are hilarious. I particularly enjoyed the rendition of "Scarborough Fair." And Bill Murray was adorbs; he has some great one-liners in this movie ("I don't get that close to the [whiskey] glass until I'm on the floor.")

Second of all, the film is really romantic. Not in a rom-com sort of way, but in the traditional Romanticism sense of the word, with an emphasis on emotion and experience, and the struggle of the individual to find their own way in the face of society. If Bob and Charlotte do have a romance between them, it's of a courtly kind.

Basically, this movie is REALLY good. It's entertaining and great to look at, but also stays with you and gives you a lot to think about. The take-away message I got from Lost In Translation is that Bob and Charlotte might be lost, but maybe that's a good thing--the only way they can ever see or find what they truly want. Thanks to Bridget for encouraging me to watch it!